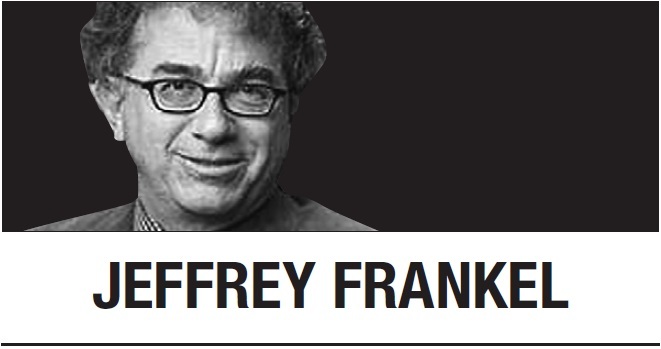 The “bicycle theory” used to be a metaphor for international trade policy. Just as standing still on a bicycle is not an option -- one must keep moving forward or else fall over -- so it was said that trade negotiators must engage in successive rounds of liberalization. Otherwise, global openness would gradually succumb to protectionist interests.

I don’t know whether the theory was right. In fact, had governments stood still on trade policy over the last three years, the world would be a lot better off than it is now. Trade is faltering -- global volumes are down a remarkable 1.1 percent over the last 12 months -- as inept bikers collide chaotically with one another.

Once competent riders are again in charge, they could do worse than return to the post-World War II formula of negotiating the reciprocal elimination of tariffs. The suggestion sounds old-fashioned. After all, another familiar truism is that “shallow integration” -- removing obvious trade barriers such as tariffs and quotas -- is largely complete, and that further progress now requires “deep integration,” or mutually agreed rules for regulating the business environment. But that agenda, despite its potential merits, now appears too ambitious.

A classic example of deep integration was the decision by the member states of the European Common Market to go beyond free trade and pursue a full European Union and even a common currency. That was evidently an over-reach politically, at least for the Brexit-plagued UK.

A current attempt at deep integration is the United States government’s demand that China stop requiring American companies to share their proprietary technology as a condition for entering joint ventures with local firms.

Many American economists support this demand, but argue that US President Donald Trump has gone about it all wrong. The sensible strategy would have been for the US to make common cause with other major governments to put pressure on China, preferably via multilateral institutions such as the World Trade Organization. German carmakers, of course, have as much at stake in China as American firms do.

Yet, even a future US president who took a better approach probably would not succeed. For one thing, regulating technology transfer would be very tricky in the best of worlds. Typically, there is no explicit quid pro quo initiated by the Chinese firm, much less by the Chinese government. Often, the foreign corporation is the one that offers to share technology, to make itself attractive to a local firm as a joint-venture partner. How could a government regulate such a subtle process?

The answer may be for the Chinese government to eliminate the requirement that foreign firms doing business in China must have a local partner. In fact, the authorities have recently taken steps in this direction in the financial and automotive sectors.

Simpler yet would have been for China to remove its long-standing tariffs on automobile imports, so that US and German carmakers could have exported directly to the Chinese market as an alternative to setting up production facilities there. Not only would this outcome have been simpler; it also would have benefited American and German workers directly.

So, let’s go back to good old tariff negotiations. The US should remove all the tariffs it has imposed over the last few years on washing machines, solar panels, steel, aluminum, automobiles, and myriad other products. In return, China should of course rescind its own retaliatory measures, for example, against US exports of soybeans, pork, and other farm products.

Turning the clock back to January 2017 would be a big improvement. But we should not stop there. The earlier conventional wisdom always overestimated the extent of shallow integration. Governments should move toward free trade in motor vehicles and as many other sectors as possible. A sector especially suited for liberalization is solar panels, turbines, and other renewable-energy inputs. Ironically, many governments that purport to care about the environment maintain trade barriers that increase the cost of protecting it. The EU, China, and the US are leading offenders.

A damaging Trump policy that will need to be reversed is his abuse of the national-security exception to justify protectionist trade measures. The international trade system had previously allowed each government to interpret this exception as they saw fit. Most applied it judiciously, knowing that abuse would encourage others to behave similarly. But under Trump, any sector of the economy, from automobiles to peanut butter, apparently qualifies as essential to national security. New international negotiations should clarify exactly what qualifies.

None of this addresses the problem that trade creates losers as well as winners -- something that we all supposedly had forgotten until we needed to explain how Trump won the 2016 US presidential election. Let’s hope that now, three years later, we have learned that tariffs also create losers as well as winners (and many more of the former in the case of Trump’s trade war). “Get tough” trade policies are not a solution to the problem of inequality.

Moreover, trade is only one of many factors that contribute to inequality. And regardless of the relative importance of each cause, the list of practical remedies is pretty much the same. In the US, it includes expansion of health insurance, pre-school for all children, infrastructure investment, competition policy, a restoration of post-2008 financial regulations, and more progressive taxation.

Some say that the US should raise trade barriers until it is ready to enact such policies. But that is a non sequitur. We should implement as many of these share-the-gains measures as we can, while also ending the trade war. And in the future, we free traders may need to be satisfied with an agenda of eliminating tariffs and quotas. Deep integration, it turns out, is perhaps a bridge too far.