Korea to call on EU to ease trade barriers on steel, automobiles, pharmaceuticals 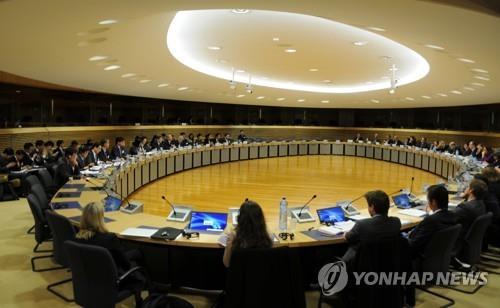 The eighth meeting on the Korea-EU free trade deal, attended by Trade Minister Yoo Myung-hee and EU Trade Commissioner Cecilia Malmstrom, will be held in Seoul.

During the meeting, the Korean side plans to ask for the improvement of export conditions for Korean firms in the areas of steel, automobiles, pharmaceuticals and samgyetang, or Korean ginseng chicken soup.

For automobiles, it will request the easing of the EU’s approval process for Korean automakers.

The EU currently streamlines the approval process if Korea exports less than 1,000 passenger cars. The Korean government will request that the EU apply the same rules to commercial vehicles, which have not entered the market yet.

Last year, Korea shipped 23,000 passenger cars to the EU market. Korean commercial cars were not sold in the market.

In the area of pharmaceuticals, Korea is slated to request for the exemption of some procedures for Korean firms in an effort to increase convenience in making shipments.

Currently, when Korean companies export pharmaceutical ingredients, they have to submit written documents that prove their standard of manufacturing management is identical to the EU’s.

As for steel, the Korean government will request the expansion of quotas, as the EU recently imposed safeguard measures on imported steel.

During the meeting, the two sides will evaluate their bilateral trade deal, discuss trade issues and work out a joint response to growing protectionism.