However, the idea of sitting behind the wheel without human inputs is getting closer to reality, with a self-driving car successfully driving through the crowded streets of Seoul without a hitch.

Dubbed “A1,” the autonomous vehicle was developed by the Automotive Control and Electronics Laboratory at Hanyang University. The research institute integrated its self-driving technology into LG Uplus’s 5G network on a car manufactured by Hyundai Motor.

“It feels like I am with a skilled driver,” said Chae Young, who accompanied the self-driving car to send images to reporters gathered at Hanyang University. “I was able to do whatever I wanted as the car traveled through the crowded highways.” 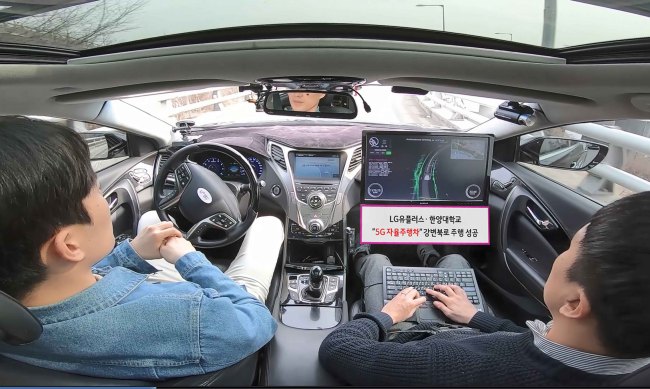 Upon switching on the autonomous driving mode, the car kicked off its 25-minute journey at Seongsu-dong, eastern Seoul. It left on its own without any driver inputs.

When the car was nearing the entrance of Gangbyeon Expressway, it slowed down and automatically changed lanes. It cruised along the Han River as ordinary drivers alongside stared on with curiosity.

Having traveled below the speed limit of 80 kilometers per hour, the car returned to the starting point without incident. Throughout its journey, the vehicle maintained a proper distance with other cars for safety.

“But driving in an urban area with nonautonomous vehicles was a totally different experience. It needs to be operational under any kind of weather and traffic circumstance in Seoul. Apparently, it is not easy.”

According to the professor, Monday’s success for the self-driving vehicle should be good news for its commercialization, as the demonstration was carried out in a much more hostile environment than previous tests

“In the previous 4G environment, autonomous vehicles could receive critical traffic information after traveling 2.8 meters. 5G technology can reduce it down to 1 millimeter,” said Kang Jong-oh, who manages future technology at LG Uplus.

According to the telecom company, Monday’s demonstration was equivalent to level 4 autonomous driving, which means self-driving is supported only under special circumstances like traffic jams.

Equipped with advance sensors and cameras, the vehicle appeared to drive seamlessly by detecting traffic signs and other vehicles’ movement. The car’s “LIDAR” system helped navigate through challenging traffic environment, such as dark tunnels.

In the meantime, 5G-powered global positioning system provided accurate geographic information. According to LG Uplus, the self-driving vehicle can figure out even a centimeter difference in street lanes.

“It is like telecom firms helping cars drive on their own after providing critical information for driving,” said Kang of LG Uplus. “Combined with mobile edge computing technology, the 5G network can provide wider coverage for self-driving cars.”

According to the company, there are about 60 self-driving cars operating in Korea, including the one demonstrated on Monday. All of them are allowed to hit the road if approved by the government in advance.

Professor Sunwoo of Hanyang University said while Korea’s autonomous driving technology is advanced enough to compete with global tech giants, there is still a long way to go due to government’s regulations.

According to the professor, collecting massive data is key to advancing self-driving technology. However, the amount of data collected from 60 self-driving vehicles can be much smaller than global tech giants such as Google.

“Google’s subsidiary Waymo is seeking to mass-produce autonomous vehicles -- up to 60,000. It means we have to run our self-driving cars 1,000 times more than Google. There is a long road ahead,” said Sunwoo.