3 South Korean shows to watch on Netflix in December

‘SKY Castle,’ ‘Memories of the Alhambra’ and ‘Clean with Passion for Now’ mark one of the best months for Korean TV on Netflix this year 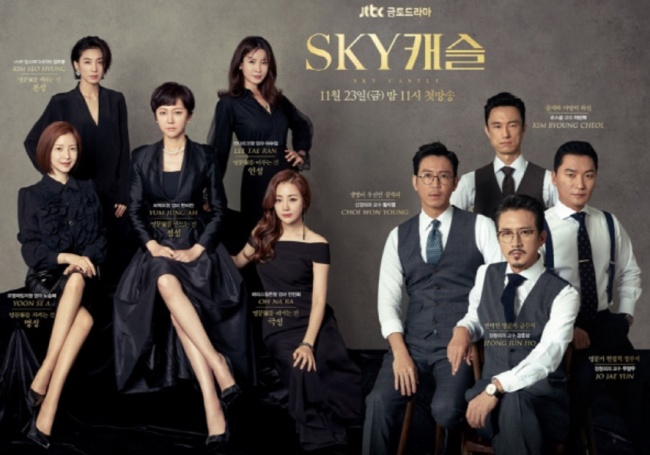 Living in a luxurious residential area in the suburbs of Seoul, a group of housewives who are determined to see their children enter South Korea’s top medical school lay bare the country’s notorious education craze and its negative consequences, with a rare dose of dark humor and a fast pace for a K-drama series.

Seasoned actress Yum Jung-ah’s role as Han Seo-jin, who she described as a “ball of greed,” has garnered positive reviews. The show’s ratings have skyrocketed from 1.7 percent to nearly 9 percent over the course of six episodes, according to Nielsen Korea.

According to director Cho Hyun-tak, the parents on the show “run around crazy” and are willing to do what is “beyond their imagination” just to see their children enter the country’s top university.

“Memories of the Alhambra”

A show that has a sword-wielding Hyun Bin, AR game and Spanish scenery

Billing itself as “suspense romance,” the tvN show is packed with fun and experimental elements as well as romance. The show also boasts a star-studded cast consisting of Hyun Bin and Park Shin-hye.

The story centers on an augmented reality game. The CEO of an investment company, Yoo Jin-Woo, played by Hyun, travels to Granada after being contacted by an AR game developer. Yoo’s business trip does not go quite as planned, as he gets entangled in a mysterious incident involving a fight with a rival who used to be his friend.

Viewers can expect romance between the main characters Yoo and Jung Hee-joo as well as some action, including sword fights between game players.

“Clean with Passion for Now”

A romance revolving around cleanliness

Based on a 2015 webtoon series of the same title, the rom-com features Gil Oh-sol, played by actress Kim Yoo-jung, and Jang Seon-kyul, a CEO of a cleaning company, falling in love with each other.

The two are complete opposites in terms of their standards of cleanliness, with Jang being a germophobe, a fitting trait for the head of a cleaning company.

In contrast, Gil, a job seeker, is not afraid to get dirty and her room is best described as messy, due in part to her busy life as a part-time worker juggling multiple jobs. She helps Jang, played by Yoon Kyun-sang, overcome his germophobia with her bright personality.

Kim rose to fame with her role in the 2010 historical drama series “Dong Yi.”