Calling it a year of soul-searching, Samsung‘s de facto chief expected to speed up M&As, transition

Ending nearly a year in jail, Samsung Electronics Vice Chairman Lee Jae-yong was released Monday, after the appeals court in Seoul ruled a suspended sentence, acknowledging his charges of bribery but rejecting a special counsel’s accusation that it was linked to his succession.

With a subtle smile on his face, the heir apparent of the nation’s largest conglomerate apologized for causing the public concern while leaving the Seoul Correction Center.

Lee also told reporters that he had spent “precious time for a year” to look back on himself, and that he has to go to see his ailing father Lee Kun-hee first when asked for future plans.

Though Samsung remained silent over the verdict and also on Lee’s future plans, the returning heir appears to be focusing on tightening the grip by seeking structural tweaks to oversee major business directions of the tech-to-bio empire.

The de facto chief will also start to make large-scale decisions, according to insiders and experts here.

“If released, he can make high-profile decisions such as Samsung’s mergers and acquisitions (of companies on the market) and its investment in expanding microchip production line,” said an official at Samsung Electronics, noting that it’s a general view inside.

After a landmark deal with Harman International in November, 2016, Samsung’s M&A drive has been losing steam in light of the imprisonment of Lee. The 49-year-old was arrested on Feb. 14, 2017 on charges of bribery, embezzlement and flight of capital over a high-profile scandal involving the former President Park Geun-hye and her longtime friend Choi Soon-sil.

The company’s CSR unit, Samsung Corporate Citizenship is being led by Rhee In-yong, former Samsung communication chief and reportedly a close aide to Lee Jae-yong. Under Rhee’s leadership, the Samsung’s CSR unit is likely to roll out programs in tune with the liberal-leaning Moon Jae-in government’s shared growth policy, in an apparent gesture to normalize ties with the new government which has been gearing for chaebol reform drive.

Meanwhile, some industry insiders suggested that the freed heir will make a grand comeback marking Samsung’s 80th anniversary on Mar. 22, following the tradition of his father.

Other experts offered different views that Lee may keep distance from domestic issues and rather become more aggressive in global M&As by engaging himself more with business leaders around the world.

During his time in jail, Lee left the boardroom of Exor, the parent company of Fiat Chrysler Automobiles and Boao Forum, an Asian version of Swiss’ Davos.

Denying his role in controlling Samsung empire through now-defunct control tower Corporate Strategy Office, Lee had told judges that his father will be the last family member with the group chairman title, that he has been working only for Samsung Electronics and its affiliates, but not others.
He may leave daily operations of Samsung Electronics‘ core business units to CEOs in charge, and spare more time painting big pictures for Samsung, other experts said.

During his trials, Samsung Electronics has been flourishing, a point that has been deemed both a boon and/or bane for Lee.

In the second quarter of last year, the electronics giant became the most profitable company in the world, beating Apple for the first time. It also saw a record operating profit of 53 trillion won ($49.6 billion) last year. On Wednesday, the tech giant surprised the market by unveiling its first-ever share split plan aimed at “enhancing shareholder value.”

Samsung Electronics thriving performance is irrelevant to his role, but is simply because the company is enjoying the so-called “super-cycle” of the semiconductor industry, experts said.

Park Sang-in, a Seoul National University professor specializing in corporate governance, said that Lee is returning at a time of urgency as the industry is seeing an end to the good years. 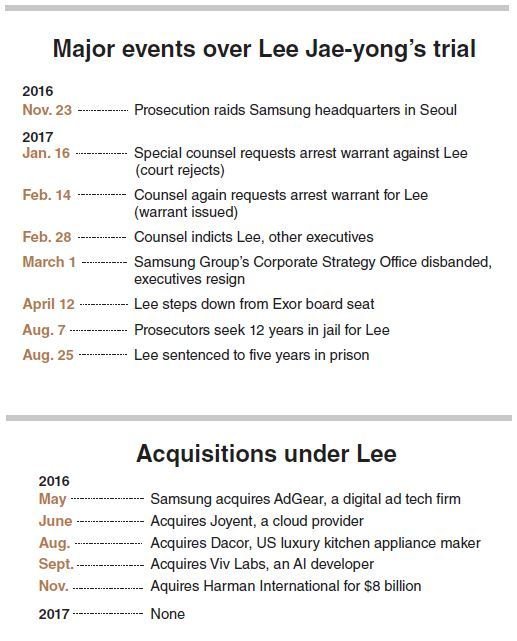 Completing the succession plan would also be a task for Lee, whose father, Chairman Lee Kun-hee, is reportedly in a semi-coma.

The Lee family holds a less than 5 percent share in controlling the tech giant, worth 306 trillion won in market cap, through an enigmatic web of cross-ownership stakes.

Lee Kun-hee has 3.44 percent in Samsung Electronics, while Lee Jae-yong has 0.58 percent and Samsung C&T has 4.8 percent. An additional 1 percent stake would cost him more than 3 trillion won.

While share price of Samsung Electronics remained nearly unchanged on Monday‘s closing price, the heir’s release may provide a positive signal for operations of other affiliates.

The ailing Samsung Heavy Industries and its plan of recapitalization may benefit from Lee‘s release, according to market insiders, raising hopes that Lee might participate in the capital increase of 1.55 trillion won by purchasing new stocks as part of efforts to win the public’s recognition for responsible management, they added.