Release available only to foreign media

This may address technical challenges of the QLED TV, which has difficulties displaying true blacks and retaining the same color quality when viewed from the sides, compared to OLED TVs.

During the event, the Korean tech giant took the wraps off its future TV technologies and products to some of its clients and foreign media outlets at a private room called “Qlounge” set up next to the firm’s booth. Korean media were kept out for reasons unexplained.

Some participants who visited the lounge said the most impressive technology shown at the lounge was the QLED TV with improved blacks.

“(The) displaying black color of the exhibited QLED TV (in the private room) was almost at a similar level to the OLED TV and its viewing angle has also much improved from its former models,” a visitor of the lounge told The Korea Herald. 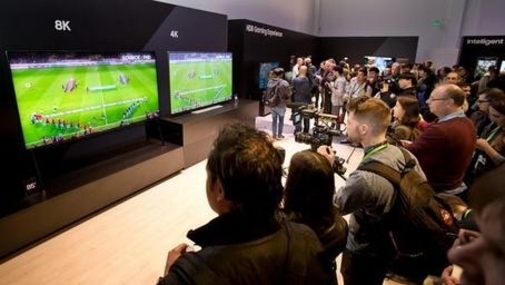 Samsung’s QLED TV based on liquid-crystal display technology is considered behind LG’s OLED TV, which can display deeper blacks, brighter whites and a greater contrast ratio because OLED pixels emit light directly without a backlight.

The visitor, who declined to be named, also said, “The QLED TV with improved black color seems to be launching as early as this year,” citing an official from Samsung’s European arm.

During the show, Samsung featured the world’s first QLED TV with 8K AI technology, which will be launched internationally starting with Korea and the US in the second half of 2018.

This AI technology raises standard definition content to 8K resolution. It uses a proprietary algorithm to adjust screen resolution based on the picture quality characteristics of each scene in order to continuously improve picture quality and easily transform any type of content from any source into high-resolution 8K.

Samsung’s “The Wall,” a 146-inch modular TV with Micro-LED technology, delivers incredible definition without restrictions to size, resolution or form. It is a self-emitting TV with micrometer scale LEDs, which are much smaller than current LEDs and serve as their own source of light.