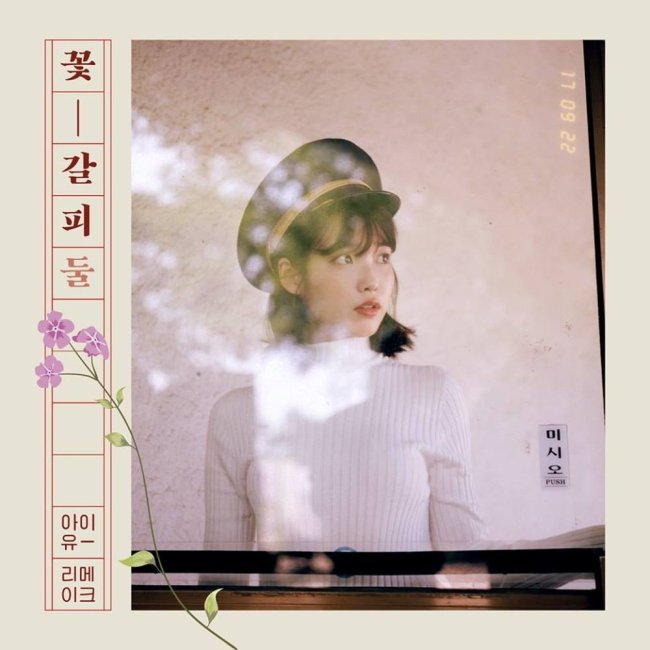 Attempting to recreate the magic of classics, this 24-year-old songstress seems to be bent on proving that she isn‘t just an idolized K-pop singer. With her latest offering “A Flower Bookmark #2,” IU aims to present herself as a thoughtful musician whose heart belongs to the bygone decades.

Maybe it’s her signature breathy and light vocals, but the cover album doesn’t quite bear the weight and complicated emotions of the originals.

IU flaunts her crystal clear voice in “Autumn Morning,” a 1991 folk tune by veteran singer Yang Hee-eun and guitarist Lee Byung-woo. But the song’s poetic lyrics are overshadowed by the singer’s overly sweet and soft voice. “Secret Garden,” a cover of Lee Sang-eun’s beloved song from 2003, suffers from the same problem. Lee‘s warm and mature voice delivers a message of encouragement, but the song’s power is diminished when delivered in IU‘s ear-tickling voice.

“Last Night Story,” a remake of the 1988 hit by trio Sobangcha, is perhaps the most notable track from the EP. Instead of being a sugary fairy, IU experiments with rather deadpan and pouty vocals in the upbeat retro song, morphing into a late-night party girl who bemoans the previous night. One is glad to hear a song that fits the singer, finally making IU sound and look more her age.

Other covers such as “Sleepless Rainy Night,” originally by Park Kwang-hyun in 1990 and made famous by Kim Gun-mo in 1992, and “Everyday With You” by ’80s icons Deulgukhwa, don’t sound that different from covers by other artists. And IU’s vocals, although flawless, are still too shallow for “Rapids,” a mournful poetic ballad by Jeong Mi-jo from 1972.

The six cover songs that revisit the ‘60s to the early 2000s are well made and diverse, but IU may have been too ambitious in her bid to pay homage to the old classics she admires.