By Shin Ji-hye
Published : May 29, 2017 - 16:01       Updated : May 29, 2017 - 17:52
Riding the wave of artificial intelligence in the ever-connected world, SK Telecom is expanding its AI ecosystem into diverse areas, including AI speakers, medical care, banking, automobiles and smart home services.

At the center of the leading telecom carrier’s AI lies the Nugu platform, which was unveiled in September through its voice-enabled speaker of the same name.

Like Google Home and Amazon Echo, the Nugu speaker provides a variety of voice-operated services to provide better convenience to everyday life. It plays music, provides weather and traffic information, searches the internet and recommends online shopping -- all simply through voice commands. With machine learning technology, the more intelligent the device becomes, the more users will use it, the firm said.

SKT said more than 100,000 units of Nugu have been sold so far, as of May. The speaker’s “conversation volume” has also reached 100 million, with one counted whenever a user talks to the speaker.

Although the speaker gets the most media attention, the use of the Nugu platform is not limited to the speaker but has been expanded to other uses. 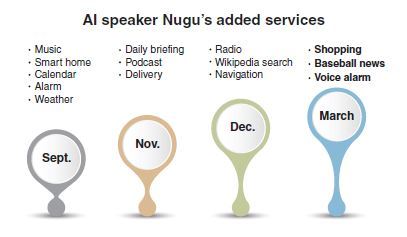 On Monday, the telecom carrier said it had partnered with Korea University Medical Center to integrate its Nugu platform with the center’s medical services.

Through the partnership, the two plan to build a voice recognition and Internet of Things-based medical care system to provide convenience for patients. The AI-based system writes charts through a doctor’s voice commands and provides medical analysts based on big data. The IoT-based system provides hospital’s information, waiting time and payment services for patients.

“We are glad to be in line with the medical center’s move toward intelligent medical care using SKT’s AI, IoT and virtual reality technologies,” said Cha In-heok, the chief of SKT’s IoT business division.

In May, SKT also partnered with KEB Hana bank to provide voice-activated banking services using the Nugu platform, the first voice-activated financial service in the nation.

Through the service, the bank’s users can check balances and transactions, verify exchange rates and bank locations. The service is expected to expand into money transfer services in the second half of this year.

“The innovation in user experience through AI and big data is becoming more important in the banking industry. We plan to provide personified financial services 24/7, 365 through integration with the financial AI platform,” said Han Joon-seong, the vice chief of KEB Hana bank.

Over the past few months, SKT has partnered with local construction firms, Hyundai Development Company, Korea Land & Housing Corp. and Woosung Group, to provide its AI and IoT service for apartment buildings.

Through the deals, SK Telecom’s AI technology will be integrated with lighting, heating and door lock sensors as well as power control within homes so residents can control the devices through voice commands. They can also control their smart home appliances, including air conditioners, air purifiers and vacuum cleaners, through voice commands or a smart home app, the company said.

Alongside medical care, banking and smart home services, the telecom operator also plans to apply its AI technology to connected cars with the aim of making the technology a voice assistant for drivers.

SKT plans to make its own navigation app T-Map, which has attracted 10 million users, voice activated and more intelligent by using the Nugu platform in the latter half of this year.

T-Map will automatically search for a driver’s destination, provide alternative routes and control IoT devices within a home while driving. In case of emergency, it will also automatically deliver locations to the related authorities.

“Navigation services have so far been limited to the prediction of estimated time and finding directions. In the future, it will become a companion to drivers to provide safety and entertainment,” said Lee Hye-yeol, the head of SKT’s T-Map business division.

Industry experts predicted SKT will continue to expand its AI eco-system by partnering with more industries.

“SKT’s AI services will evolve into a platform to raise customer understanding and satisfy personified needs by integrating data generated from its various services,” said Kim Hong-sik, an analyst at Hana Investment & Securities.

“The firm will continue to present new business models in the areas of the smart home, connected car, distribution, manufacturing and finance by integrating them with Internet of Things technologies,” Kim added.

SKT plans to open its artificial intelligence platform Nugu to third-party developers in the coming months to solidify its lead in the smart home appliances market.

“We plan to open the application program interface of NUGU’s AI platform for third-party developers at the end of June. We will make it an open platform like Amazon’s Alexa,” Choi Jin-sung, SKT’s head of corporate research and development, said in an interview with The Korea Herald.

According to market research firm Tractica, revenue generated from the direct and indirect application of AI software will grow from $1.4 billion in 2016 to $59.8 billion by 2025.