According to data by the Bank for International Settlements based in Basel, Switzerland, Korea’s total credit to the government sector at market value surged 67 percent to $590 billion as of June 2016 from $354 billion at the end of 2011.

The combined government debt of the world’s 20 major economies grew 15.9 percent in average over the same period.

In terms of debt growth pace, Australia ranked second with 32.8 percent gain over the cited period, followed by the US with 22.3 percent and Italy at 21.9 percent.

By total debt volume, the US topped the list with $18.9 trillion government debt, which is about one-third of the G-20’s total debt. The eurozone came second with $12.5 trillion debt, trailed by Japan at $11.3 trillion and the UK with $2.9 trillion. 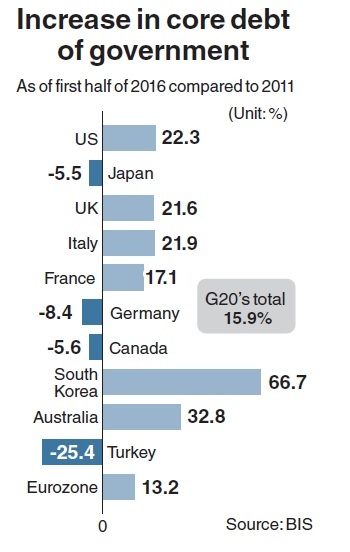 At nominal value, the US also had the largest government debt with $17.7 trillion, followed by Japan with $10.4 trillion, China with $4.8 trillion and Italy with $2.5 trillion. Saudi Arabia had the fastest debt growth at nominal value at 100 percent, with China ranking second at 90.6 percent debt growth.

In terms of debt-to-gross domestic product ratio, Korea ranked as one of the lowest among G-20 -- marking 42.7 percent as of June 2016.

Korea’s Finance Minister Yoo Il-ho recently said the government plans to front-load 70 percent of its 2017 budget in the first half to prop up the faltering domestic demand.

The ministry plans to limit national debt-to-GDP ratio to the low-40 percent level by 2020.

Meanwhile, major economies, including the US and the UK, are expected to expand their fiscal policies in earnest this year, as the era of ultra-low interest rates at central banks has nearly come to an end, economists say.