This is the new slogan the Seoul city government chose, after debating between “Seoulmate” and “SEOULing.”

The government officials, and people who voted for the new slogan, probably had in mind some successful campaigns overseas, such as “I Love (heart) New York,” which has proven its global appeal.

However, the slogan may not be going down so well, at least on the initial impression.

People are making parodies of the sentence by using it in different photos and conversations.

One Twitter user wrote “I will find you, and I will Seoul you” over a photo of Liam Neeson in a scene from the hit action thriller “Taken.” 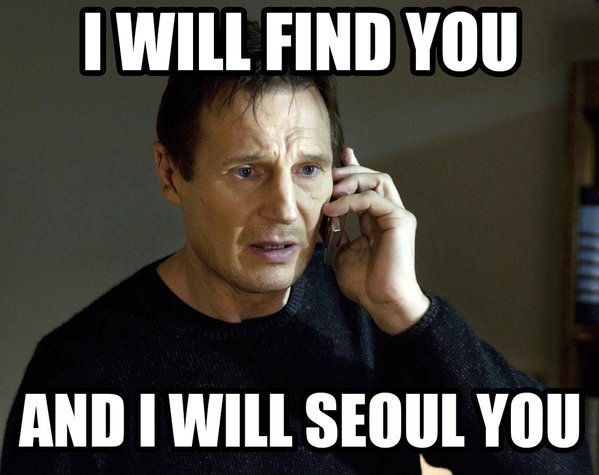 Many others added their own twist to Seoul’s new slogan.

Referring to the Park Geun-hye government’s failed attempts at lowering the cost of housing, one Twitter user wrote “I. SEOUL. U (Korean: I will raise the jeonse price).” Jeonse refers to a lump-sum rent deposit.

Another Twitter user posted a fictional conversation between a tenant and home owner -- “Hello, it’s me. I Seoul you (Korean: Hi, your jeonse contract is almost over. And we would like to raise the price.).” The tenant responds, “Don’t Seoul me please (Korean: Can you please reconsider that).”

Comparing it to the infamous Bucheon slogan, “Bucheon Hands Up (Put your hands up),” one Twitter user said, “Maybe it’s time for us to reevaluate the Bucheon slogan.”

One expat commented, “Don‘t Seoul Me,” while another said, “Don’t you Seoul me young man.”

Seoul, and the Korean government, have been ridiculed in the past for slogans that were awkward at best.

In 2009, there was the slogan “Infinitely Yours,” which has zero connection to the city or the country. There was also the widely ridiculed “Korea, Sparkling” and “Seoul, my _____,” a highly risky tactic for anyone in any way you put it.