Cold War, racism linked to the beginnings of the world’s most popular cosmetic surgical procedure

In the still-available clip, Banks, an African-American TV personality, claims that the surgery that the 25-year-old Korean-American named Liz received was an attempt to “look more Caucasian” by Asian women.

“You and I are the same,” Banks tells Liz, pointing her own artificially straightened hair. Her voice is firm and even intimidating.

“I know I’m not going to look white with a hair weave. But it’s still one step closer to (looking white). And your eyelid is one step closer. Do you understand?”

Are women like Liz really trying to “look white” by undergoing the procedure that creates a permanent crease on upper eyelids without even realizing it? 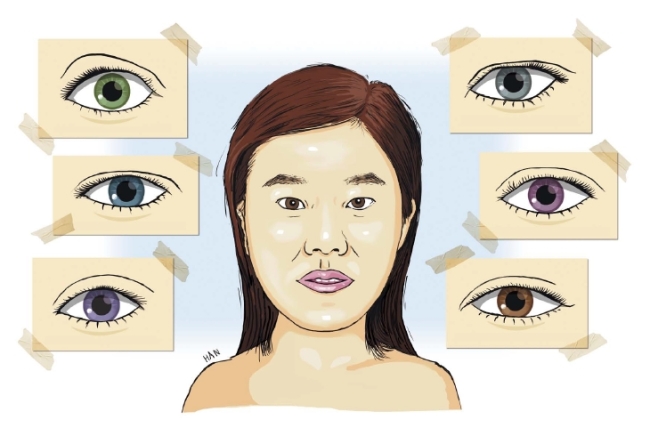 In today’s Korea, where 20 percent of the female population has had plastic surgery at least once in their lives, the public rarely associates its ever-booming cosmetic surgery industry with race or the nation’s turbulent modern history.

“I would get serious complaints if I performed the procedure and the Korean patient gets a crease like the one of a Caucasian person. What people want is a natural crease that is suited to Asian faces,” said Seoul-based plastic surgeon Na Min-hwa, who has been performing the procedure for the past 15 years. “The whole idea that undergoing this surgery is an attempt to look white is absurd.”

A number of studies, however, have suggested that the introduction of the double-eyelid surgery to the Korean Peninsula in the 1950s was closely related to racism and the U.S. military agenda, and that legacy still carries a significance today.

Most popular plastic surgery in the world

With or without Tyra Banks’ rant, the double-eyelid operation has evolved into an even more popular procedure in Asia and the rest of the world in recent years.

According to the International Society of Aesthetic Plastic Surgery, the procedure was the most-performed plastic surgery worldwide last year. Some 1.43 million individuals underwent the procedure, including Asian-Americans, accounting for 14.8 percent of all cosmetic surgery performed across the globe in 2014. South Korea, meanwhile, performed the fourth-most cosmetic surgical procedures in the world last year.

Among the well-known Korean figures who have had the procedure are former President Roh Moo-hyun and veteran singer Patti Kim.

The surgery was first developed and performed in Korea by Dr. D. Ralph Millard, an American military plastic surgeon who was stationed in the country during the Korean War (1950-53). Among the very first Koreans who received the particular procedure were Korean war brides who married American soldiers.

It is estimated that 50 percent of Asians have naturally creased eyes. However, the preference for double eyelids among Asians today is not “inherent, natural or random,” according to scholar Taeyon Kim.

“This preference has an historical development that is shaped by the motives of the American Cold War that produced the Asian as an ambivalent threat that needed to be contained and domesticated,” Kim wrote in her 2005 Ph.D. dissertation submitted to Bowling Green State University.

Although it is believed that double eyelid surgery was first introduced in late 19th-century Japan, it was during the Korean War that the operation became popular in Asia, according to Kim’s research.

According to Kim, Millard was stationed in Korea during the war as part of an American public relations campaign to show “American’s benevolent face to the Koreans.” On top of developing and performing double eyelid surgery ― which was the alteration of “Oriental” features to “Occidental” ― he was also committed to serving those who were severely injured on the battlefield and in need of surgical reconstruction.

During the war, Korean eyes without the crease ― referred to as the superior palpebral fold in American medical texts ― were dubbed “slanted,” and were seen as a mark of inscrutability and deviance. In her text, Kim argued that it was significant that Millard, who is one of the pioneers of Asian double eyelid surgery, was a military surgeon whose experience of Asian bodies was firmly rooted in Cold War ideologies and discourses.

“Surgically altering the ‘slanted’ eyes became a mark of a ‘good’ and trustworthy Asian, one whose modification of the face provided a comforting illustration of the pliable Asian, and served as evidence of the U.S. as the model and Asia as the mimic,” Kim wrote.

The scholar pointed out that the legacy of such notions can be found even in the popular advertisements in Korea in the 2000s. The perceived enlargement of the eyes by undergoing the procedure is described in ways that suggest a “broadening of the mind, a brightening of the soul, and confidence in the spirit” in modern Korean ads, according to the scholar.

In 1964, Millard wrote why the Koreans without the fold are problematic. “The absence of the palpebral fold produces a passive expression which seems to epitomize the stoical and unemotional manner of the oriental,” he wrote.

Although the War Brides Act in 1945 enabled American soldiers stationed overseas to bring home wives of a different race, interracial marriages were illegal in parts of the U.S. until the early 1960s.

In such a political climate, Korean military brides were considered both cultural and racial threats to the U.S., which influenced many Korean women, especially those who wished to marry American soldiers, to alter their eyes in the 1950s.

“It is felt that this deorientalizing problem may well come home to the American plastic surgeon, for there have been well over 10,000 Japanese war brides as well as many post-war marriages with Korean girls,” wrote the American surgeon Millard in 1955.

According to Yuh Ji-yeon’s 2002 study on Korean military brides, the women who were brought to American families at the time were strictly pressured to nurture their children as future Americans and provide their husbands with an American lifestyle: “Their fear was that, unless properly Americanized, the women would ‘foreignize’ their husbands and children.”

David Palumbo-Liu’s book, “Asian American: Historical Crossings of a Racial Frontier” talks about how cosmetic surgery reduced such American anxieties by demonstrating the “shaping power of the U.S.” and the “malleability of Asia.”

By altering their eyes, the Korean brides became less threatening racially, while their “passive, compliant” nature would make them easily assimilate, according to the studies.

“While it is primarily beauty that motivates (today’s women’s) desire to alter their eyes, this beauty is built on a legacy of a history of Western science and race that privileged the white body as the normal, beautiful body,” Kim wrote in her study.

Song Ji-hye, a Seoul native, underwent double eyelid surgery in 2005, at age of 19. The 29-year-old said she just wanted to have a more “defined look,” and had no desire to look white.

“I’ve never had anyone asking me if I underwent the surgery in order to look more white,” she said. “I’ve never seen anyone who underwent the procedure for that reason, either. It sounds absurd to me. Caucasians are not the only racial group of people who have double eyelids. If anything, I think those who undergo the procedure want to look like fellow Asians who have naturally creased eyes.”

Culture critic Lee Moon-won said most Koreans are unconscious of the Western influence on the country’s beauty standards, partly because they are not often exposed to ethnic or racial diversity.

“Most people don’t think they want to look white, and that may be true,” he said.

“But when you think about it, what the society collectively considers as beautiful ― big eyes, a small face, and perked nose ― are things that many Koreans can’t achieve naturally. The (Western) influence is there, but people don’t question it because the society has very narrowly defined notions of beauty. When everyone wants to look the same way, you think that’s the normal way regardless of its history or meaning.”

Millard in 1955 predicted that the double-eyelid surgery would be useful in the U.S. to assimilate the children of military brides from Asia.

“Especially in the products of the second generation, the plastic surgeon may be called upon to help them blend with their surroundings,” he wrote.

Some 60 years have passed, and South Korea has evolved into the world’s plastic surgery-capital. A total of 440,582 surgical operations were performed in Korea last year alone, accounting for 4.6 percent of all procedures performed in the world. Double-eyelid surgery is one of the most common procedures being performed here.

In the U.S., plastic surgery is on the rise among Asian-Americans overall, with 44 percent of them opting to receive double-eyelid surgery.

And women continue to be shamed in both countries.

Song Ji-hye was once called a “seonggwei,” meaning “plastic surgery monster” by a male colleague at a drinking party.

“You get shamed no matter what,” Song said. “If you don’t get it, you are made fun of your looks, and once you get the procedure, you are shamed for having done it or not being naturally beautiful. I think it’s better to at least look good if you are going to be shamed anyway.”