In today’s Korea, plastic surgery is part of life, fueled by a complex blend of lookism and economy

“I didn’t have any dramatic reasons for doing it,” she said. “I don’t think I had been particularly unhappy with my looks. I just wanted to improve it, just like the way you would improve your CV.”

Park, who now works at a big firm, said she is satisfied with the results and her decision. Yet her experience post-surgery was not always pleasant. Once, Park was told that she was a “fake beauty.” Some belittled her by saying she wasn’t “naturally beautiful.”

Park belongs to the 20 percent of all South Korean women who are reported to have undergone plastic surgery at least once in their lives.

While Korea is often referred to as the world’s plastic surgery-capital ― it ranked fourth among the countries that performed the most cosmetic surgical procedures last year ― the country’s lookism today is linked to more complex social and economic situations, experts say.

“There is a lot of evidence that the plastic surgery industry is unethically involved in the nation’s labor and job market,” said culture critic Lee Moon-won. “So many firms require applicants to include their photographs when submitting their resume, while plastic surgery clinics openly say ‘appearance can be your competitive edge in the job market’ in their public ads.”

Often, the persistently high number of unemployed young Koreans ― standing at 410,000 as of the first half of this year ― attribute their bad luck to their looks. 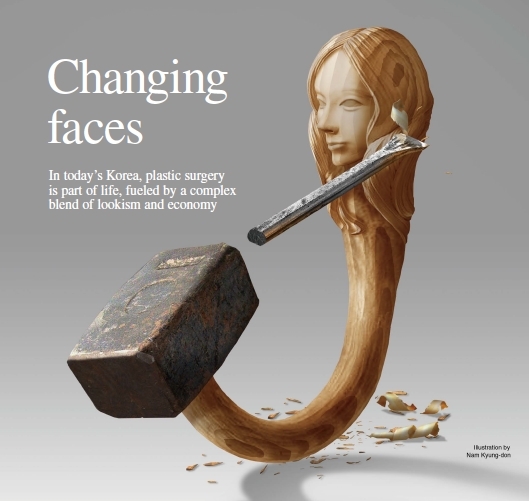 The nation’s popular culture depicts this tendency in many ways.

“Let Me In,” a television program offering a complete makeover mainly through extensive plastic surgery, is one of those blamed for stoking lookism.

Featured women in the program include a young job seeker who wishes to become a flight attendant but feels her appearance is preventing her from landing her dream job. Another is a North Korean defector who claims her “aggressive” facial features make her vulnerable to discrimination here.

Another unemployed participant, a bullying and dating abuse survivor who had been wearing a facial mask every day to hide her protruding jaw, in fact bent her knees in front of the MCs and begged. “I want to live like a human being for once in my life,” she said in tears.

“Most of the women featured are socially marginalized, with low incomes. Their problems, such as low self-confidence, don’t only stem from their appearance,” said Lee Yun-so from Womenlink, a women’s rights organization, who recently filed a public petition against the program.

“It’s a vicious circle. It’s a disadvantage (in the job market) if you are not physically attractive, and when you are unemployed, you can’t ‘solve’ the situation because you can’t afford to pay for your surgery.”

A “milder” version of such lookism was apparent in a recent episode of MBC’s “Real Men,” a variety show featuring celebrities experiencing life in the military,

When Kim Hyun-sook, a female comedian, came out after dyeing her hair back to black to comply with military rules, other cast members had a field day, teasing her that she had become even less attractive.

“Commenting on or making fun of someone’s looks is so normal in our society that no one thinks there is anything wrong with it even when it’s being done on national television,” Lee Yun-so said.

While the emphasis on looks in the earlier days of Korea’s modernization was geared toward looking clean-cut and neat, the preference has evolved into more elaborate and glamorous features. Now the trend changes with a blink of an eye, from a bigger set of eyes and a higher nose to a smaller face shape. More men have also joined the craze, seeking to tweak their facial features and building their bodies, a phenomenon dubbed the “Adonis complex.”

Some blame the obsession on Korea’s ruthless capitalism, with media and the establishment reinforcing lookism by commercializing sex and feeding off sensational interests to maximize their income.

Rapid introduction of the Western culture since the Korean War (1950-53) also played a major role, as the Eastern notions of beauty were overtaken by the Western features that quickly became the standard for things that are beautiful, supreme and successful.

Such excessive infatuation toward looks have subsequently fostered the country’s surgical skills.

Of the visitors, the second-largest number of them, 36,000, received cosmetic treatments or surgical procedures at plastic surgery clinics. Seoul’s Gangnam district, where 35.5 percent of all cosmetic surgery clinics are located, made 165.7 billion won from treating foreign visitors last year, accounting for 29.8 percent of the total spending by patients from overseas.

For Park Ji-eun, being shamed for having undergone plastic surgery is what she finds the most ironic in today’s society.

“I’m honest about it whenever somebody asks. I tell them I’ve undergone plastic surgery,” she said.

“But I see irony in this whole situation. We don’t shame people who climb the social ladder by studying hard or working hard. We are often told that what matters is how much effort you put in to better yourself.

“People who undergo plastic surgery pay their own money and endure physical pain to obtain what they weren’t given. If this is not making efforts, what is?”