Almost 30 percent of the women in the study, whose ages ranged from 20 to 70, were HPV-positive. In South Korea, only 10 to 15 percent of women are known to have the infection.

There are more than 100 types of HPV, of which at least 13 high-risk types may cause cancer, according to the World Health Organization. Among the 13 high-risk varieties of the sexually transmitted virus, types 16 and 18 are known to cause 70 percent of cervical cancers and precancerous cervical lesions.

Lee said it was unlikely that medical facilities in North Korea offered Pap tests ― which examine a cell sample collected from the cervix under a microscope ― mostly for financial reasons. The test is crucial for detecting HPV. 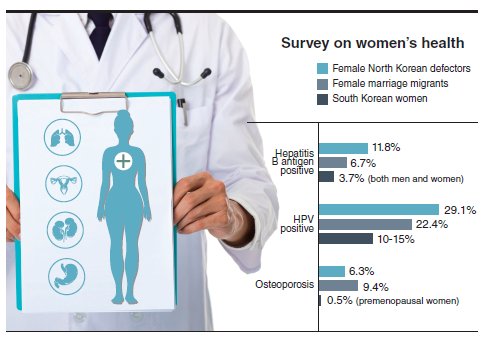 A few years ago at an international medical conference, Lee also had a chance to examine a public poster that had been used in North Korea to encourage women to get colposcopies to prevent cervical cancer.

The equipment used in the procedure, a colposcope, provides an enlarged and illuminated view of the cervix. The machine is usually used after a vinegar-like solution is applied to the cervix, which causes abnormal cells to turn white ― and therefore become more visible.

However, Lee and other medical experts at the conference concluded that colposcopies in North Korea did not use a colposcope, based on the descriptions on the poster.

“Instead of a colposcope, it seemed they were just using an ordinary magnifying glass, ones that anyone would use to read newspapers, to see if any tissues turned white,” Lee told The Korea Herald.

“Detecting HPV or other abnormalities can be difficult without Pap tests and proper colposcopes.”

Lee’s study also showed that 11.8 percent of the women tested positive for hepatitis B surface antigen (HBsAg), which means they are susceptible to hepatitis B, a serious infectious disease of the liver. Only 3.7 percent of all South Koreans, both men and women, are HBsAg-positive.

Lee said the high rate of HBsAg-positive defectors may be due to inadequate vaccinations in North Korea. Those who have not been vaccinated or have not developed antibodies after a hepatitis B infection may develop liver failure or liver cancer.

“We need to take proactive measures to protect these women from hepatitis B, because not only does it cause all kinds of liver failure, but it can also affect their newborn babies,” the gynecologist said.

“If a pregnant woman is a hepatitis B carrier and is also HBeAg-positive, her baby has a 90 percent likelihood of being infected and becoming a carrier.”

According to the WHO, 25 percent of children born to mothers who are hepatitis B carriers die from liver cancer or chronic liver diseases.

Also, 6.3 percent of the women who defected from North Korea had osteoporosis, a bone disease that can lead to an increased risk of fractures, and 42.3 percent had osteopenia, a condition in which bone mineral density is lower than normal, the study showed.

As the two conditions usually develop during or after menopause, the rate was unusual, as 82 percent of the women were aged 49 or under, Lee said.

“I would assume that it mostly has to do with malnutrition,” Lee said. Only 0.5 percent of premenopausal South Korean women develop osteoporosis.

Lee stressed that there should be more support from the South Korean government for women’s health, in consideration of their unique background and situation.

“I found that many of them are not very familiar with and are even intimidated by the health care system in South Korea, as well as the national health insurance system here,” she said.

“Some are just too busy settling down and don’t think of medical examinations as a priority. But regular checkups and vaccinations are crucial for prevention and early detection of any diseases. The authorities somehow have to persuade the women to get the necessary health services.”

Lee’s study, which also surveyed 81 women who immigrated to Korea by marriage, found that they are more prone to the three diseases than South Korean women. Twenty-two percent of them were HPV-positive, while 6.7 percent were HBeAg-positive and 9 percent had osteoporosis.

A total of 18,776 female North Korean defectors and 206,369 of female marriage migrants were living in South Korea as of last year.