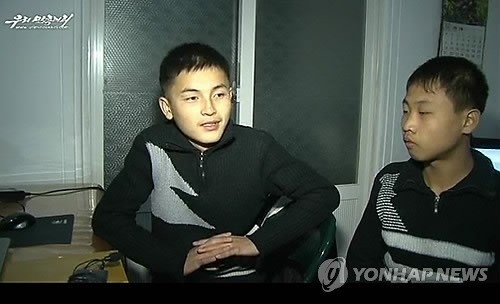 North Korea on Tuesday claimed the nine young defectors who were repatriated from Laos while fleeing their repressive homeland last year are not only alive but leading a “happy life,” in attempts to quell speculation that some of them had been executed.

Uriminzokkiri TV, a North Korea propaganda broadcaster, aired a video depicting the lives of the youngsters who the communist regime argues were once “enticed and kidnapped” by South Korean authorities. In the clip, four students are seen taking a class and using a computer at a high school in Pyongyang known as a cradle for artists and technology experts.

The television claims that four others study at a prominent high school in Hyesan, a major city in the country’s far north, while the remaining ex-defector has entered a teachers college in Hamhung, the country’s second-largest city in South Hamgyong Province.

The claim contradicts the allegations of Park Sun-young, a former lawmaker and campaigner for defector rights, that the oldest two of the nine were executed for being heavily influenced by capitalist foreign culture and the rest sent to political prison camps.

“Given that barely one out of 10 computer geeks gets accepted to this school, we’ve received more favors than other kids,” Ro Chong-yong, one of the defectors, said in the video.

“I can hold my head up with pride since I go to the school that others want to but just can’t,” another deportee named Ryu Chol-ryong said.

The Unification Ministry here said it is closely monitoring the situation but could not confirm the survival of the two oldest defectors as the clip only showed the four younger ones only.

“As they said the program was its first installment, it is a possibility that the television will air follow-ups on the teens in the future. Then we could possibly confirm that they are alive,” a ministry official told reporters on condition of anonymity.

The deportation of the defectors, aged between 16 and 24, drew extensive public attention after being caught by Laotian authorities while trying to reach the South Korean Embassy in Vientiane in May 2013. The Southeast Asian country, which has long been nurturing ties with North Korea through party-to-party cooperation and other exchanges, took flak for sending them back home where they would face torture, slave labor or even death.

Pyongyang has been coming under intense pressure to improve its dire human rights records since the release of a watershed U.N. study in February detailing “systematic, widespread and gross” violations.

Last month, a U.N. committee approved a resolution calling for the Security Council to refer the situation to the International Criminal Court and slap targeted sanctions against the key perpetrators.