Obama will arrive on April 25 for a two-day visit, Seoul’s presidential spokesman Min Kyung-wook said. It will be Obama’s first trip to Seoul since Park took office last year. Park made a state visit to Washington last year, and the two leaders have since met on the sidelines of international gatherings. 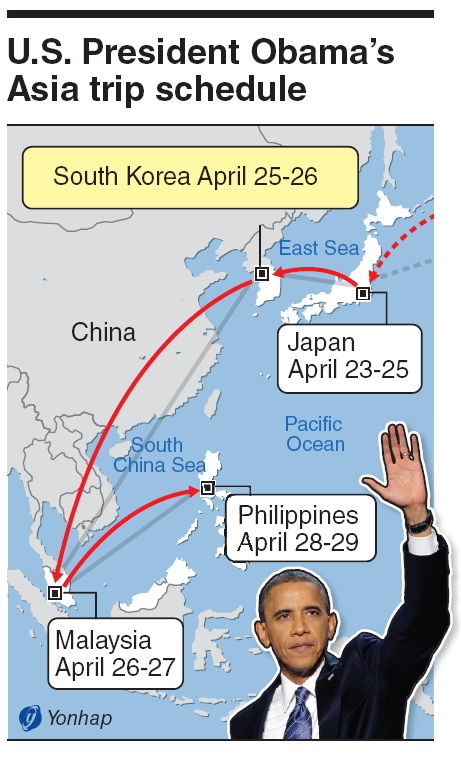 Last month, Park and Obama had a three-way meeting that also involved Japanese Prime Minister Shinzo Abe on the sidelines of an international antinuclear terrorism conference in the Dutch city of The Hague.

“President Obama’s visit to South Korea comes at an opportune time in light of recent fluid situations on the Korean Peninsula and in Northeast Asia,” Min said. The two leaders are expected to discuss the alliance, North Korea and its nuclear program, as well as other regional and global issues, he said.

In Washington, the White House made a brief announcement, saying Obama will visit Seoul following a three-day trip to Japan starting on Wednesday. After Seoul, the American leader will then travel to Malaysia from April 26-28 and the Philippines from April 28-29, it said.

The White House said in February he will visit the four nations in late April.

It said at the time that Obama and Park are expected to “reaffirm the United States’ commitment to a strong alliance, review recent developments in North Korea and our combined efforts to promote denuclearization, and discuss our ongoing implementation of the Korea-United States FTA.”

Monday’s announcement is the first official release of his exact itinerary for his Asia trip.

Obama’s visit comes after North Korea ratcheted up tensions with a string of provocative actions in recent weeks. The communist nation test-fired a series of missiles and rockets off its east coast and fired artillery rounds into waters south of the western sea border with South Korea, prompting the South to fire back.

Bilateral issues that could be on the agenda for Park’s talks with Obama include Seoul’s request for a delay in its planned retaking of the wartime operational control over its troops from Washington. That transfer is now planned for late 2015. (Yonhap)