Infectious diseases on the rise in Korea 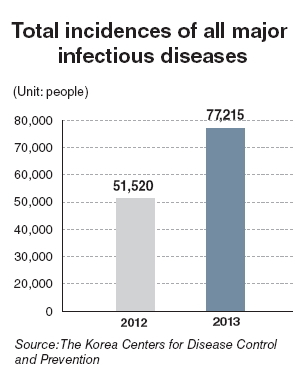 The number of infectious diseases in South Korea surged last year, reflecting the steady rise in the average temperatures on the Korean Peninsula, and raising concerns about a change in broader disease patterns.

A total of 77,215 Koreans came down with infectious diseases in 2013, up about 50 percent from the previous year, the Korea Centers for Disease Control and Prevention said. Tick-borne infections took a bigger share, as their habitats moved north as the average temperatures went up.

“The Korean Peninsula’s climate is turning subtropical and more people are coming in and out of the country,” said Kim Woo-joo, professor of infectious disease at the Korea University Guro Hospital. “We have to take steps to prevent new diseases from spreading in the country.”

The change in the environment, possibly initiated by global warming, has been linked to the spike in the number of new infections in Korea such as scrub typhus, a febrile illness caused by Rickettsia tsutsugamushi bacteria and characterized by fever, headaches, rashes and eschar formation, or scabbing. Scrub typhus is also known as tsutsugamushi disease or Japanese river fever. 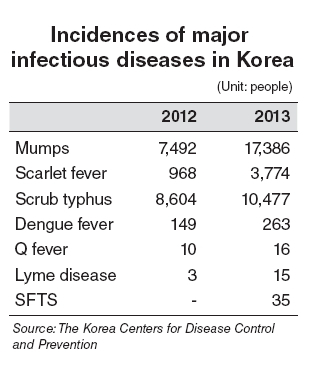 The center’s report showed that the number of patients diagnosed with scrub typhus rose by 21.8 percent to 10,477 and 24 people died of the disease last year. The figures were the highest since the center began to compile data in 2001.

Experts said a growing number of Koreans are traveling to rural and remote areas where the risk of contracting infectious diseases is high, leading to the spread of diseases such as dengue fever and severe fever with thrombocytopenia syndrome, also known as SFTS.

SFTS, which has a fatality rate of as high as 30 percent, was found for the first time in Korea last year. Among the 35 people who were infected, seven died.

Tick-borne diseases such as Q fever and lyme disease also showed a growth trend, with 16 and 15 patients identified,