“The public library is where I can get educational benefits either free of charge or cheaper than anywhere else, and I want to make the most out of it,” Ahn said in an interview with The Korea Herald.

Every Friday night, she attends a computer class for seniors, organized by Jongno Public Library in central Seoul. “I wish there were more educational and cultural programs so that people like me can enjoy their golden years and engage with the local community,” she said. 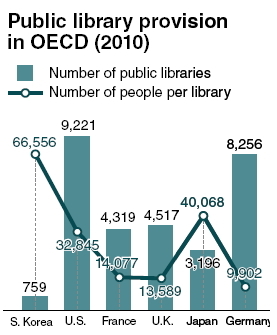 Along with Ahn, more Koreans aged 50 and older, particularly retiring baby boomers, are flocking to public libraries. Given that South Korea is one of the fastest-aging countries, it’s no surprise that the average age of library users is going up. According to the National Library of Korea, the proportion of users aged 60 or older at the state-run library jumped to 19 percent this year, compared with 14 percent in 2010.


The impact is already changing the scene at many libraries here. On Oct. 30, for instance, Bemilda Gines was joining a paper workshop program at Yongsan Public Library. Gines, a migrant wife from the Philippines, and her 2-year-old along with five other students from Japan and China were making a paper mock-up of the golden crown of the Silla Kingdom, aided by a Korean instructor, who gave information on Korean history and Buddhism. “I want to know more about Korean culture and history,” Gines said.

Behind the push for new library programs customized for users with a multicultural background like Gines’ family is the Korean government’s broader plan. A primary example is the Culture Ministry’s five-year “Library Development Comprehensive Plan” for 2009-2013.


The policy plan places importance on expanding the library’s functions. The ministry wants libraries to provide seniors with a venue for lifelong education and also help narrow the gap between information haves and have-nots, including migrant workers and multicultural families.

Such top-down policy initiatives, however, can lose focus if the programs in question are not fully developed for target users, experts warned. “There’s nothing wrong with expanding the library’s community center role and running more programs, if that’s what local residents want and libraries continue to offer information resources as a channel for such programs,” said Kim Gi-yeong, professor in the Library and Information Science Department at Yonsei University.

The class is one of the popular programs at the facility affiliated with the regional community center, as it offers an opportunity for library users to gain rich experiences on book publishing at a steep discount.

Some programs extend to job-related courses for those who want to start their post-retirement career. Galma Public Library in Daejeon, for instance, conducts an eight-week course titled “Fairy Tale Master Granny,” which provides storytelling skills and a combination of magic and narration to elderly women.

The program is linked to the regional government’s initiative. Park Hwan-yong, mayor of Seo-gu in Daejeon Metropolitan City, said: “Seo-gu Office plans to employ the grannies as storytellers for underprivileged children once they complete the training.”

Book-related projects for senior library users are also gaining traction. The Culture Ministry and the Korean Library Association carried out a project to spread large-print books to public libraries. A total of 20,100 books were reprinted in larger font and distributed to 493 public libraries across the nation since the project started in 2011.

For libraries, holding such programs is advantageous as the participants tend to revisit the library to explore topic and resources further. For seniors citizens, the course not only offers educational activities but also opportunities to build relationships with other participants.

For those with multicultural family backgrounds, libraries are taking note of the importance of their adaptation issues, such as language barriers and cultural differences. This is a fairly difficult challenge to handle, but Gimhae Multicultural Library has successfully implemented its multicultural programs, attracting more than 100 patrons a day.

The library, nestled inside of Gimhae Foreign-Workers Center, stands out as its facilities and programs are carefully designed for the practical needs of foreign workers. Its two consulting rooms are used for sessions in which foreign workers get consulting on finance, law and medical coverage through interpretation services.

It also provides classes on Korean language and culture to help its users to adapt to new life in Korea. The thoughtful mix of programs via a one-stop service resulted in positive feedback. Gao Xin, a migrant from China, said she often visits the library to borrow Chinese books and read them with her husband and son. “There are various courses too, and I attended computer classes (the library held),” she said.

But not all libraries have the necessary resources and manpower like the one used by Xin. Experts said more efforts should be made to lay a firm foundation so that libraries can properly expand their services for various groups.

“Some librarians have no time to focus on the basic services because they are too busy running other programs. Now is the time for Korea to consider ways to ensure the sustainable development of public libraries,” said Kim You-seung, professor at Chung-Ang University.

Against this background, focus and customization are crucial. Professor Kim Gi-yeong of Yonsei University said both libraries and government bodies should consider different conditions and issues when they map out programs.

“Ansan and Guro have high multicultural populations, and the majority of them are foreign laborers. They have no time to visit libraries during the daytime, so programs should be held at night time to boost participation,” Kim said.