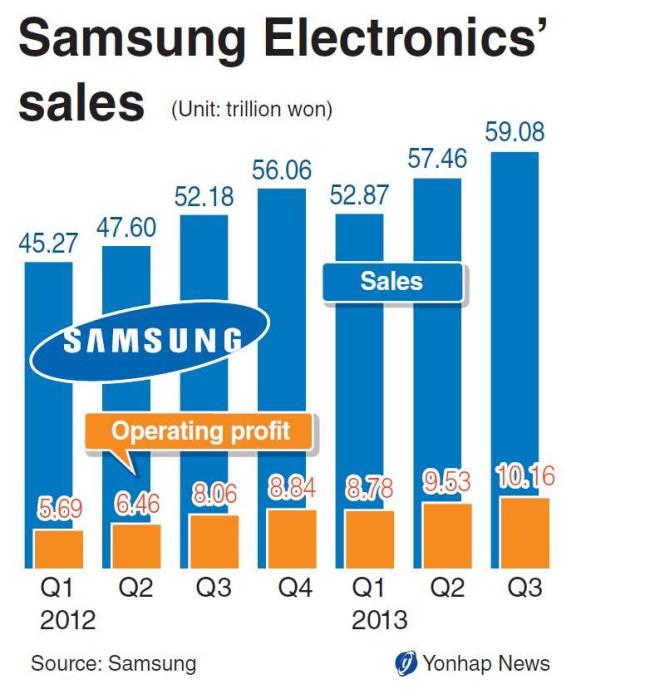 Samsung Electronics, the world’s No.1 maker of computer memory chips and smartphones, posted a record-high third-quarter profit on stellar performances by the semiconductor and mobile divisions, the company said on Friday.

During the July to September period, Samsung sold over 100 million handsets for a fifth consecutive quarter. For smartphones, it is said to have sold around 87 million units to sell more than 80 million for the first time during a single quarter.

Earlier this month, Samsung’s mobile unit chief Shin Jong-kyun had confirmed that the company sold more than 40 million units of the Galaxy S4 ― launched in April ― according to recent figures, breaking a record set by the Galaxy S3.

The semiconductor business logged an operating profit of 2.06 trillion won in the third quarter, compared with 1.02 trillion won a year earlier, on the back of high-margin products.

“Smartphone sales have risen by around 15 percent, while tablets sold around 20 percent more,” said Kim Hyun-joon, executive vice president of the mobile division.

Kim indicated that the Galaxy Note 3, which was launched during the third quarter, may sell more aggressively in the coming months, as the fourth quarter is when demand peaks.

Further, he predicted tablet sales would grow by bigger clips toward the year end.

“Smartphone sales will be reduced to single-digit growth, while tablets will grow by more than 20 percent,” he said.

For both LCDs and home appliances, which also have been experiencing sluggish growth on dormant global economic conditions, Samsung plans to market more value-added products.

As of the third quarter, Samsung Electronics has spent 6 trillion won on facility investment, among which 2.6 trillion won was for semiconductors and 1.9 trillion won spent on the Display Panel division.

In the fourth quarter, the company will be investing more in upgrading DRAM facilities and research institutes. The 8th generation LCD plant in Suzhou of China, which marked its completion on Friday, and the semiconductor plant in Xian, also in China, will bring the company’s total investment this year to about 24 trillion won.