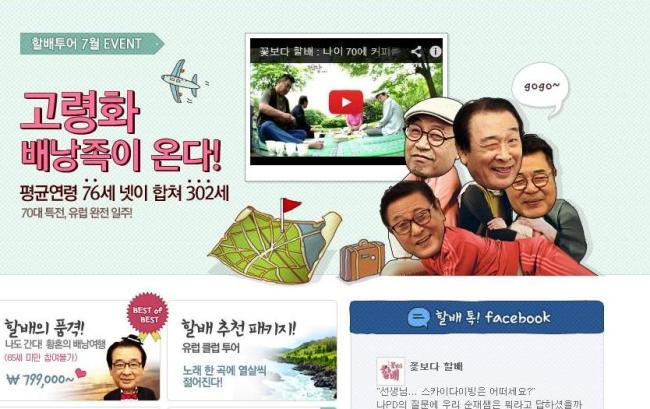 South Korean TV entertainment shows are usually dominated by comedians and young entertainers, but a unique show featuring senior actors is trying to buck the trend.

“Ggotboda Halbae (Gramps over Flowers),” the newest show on cable TV channel tvN’s, is garnering nationwide attention weeks before its launch next week.

As of Wednesday afternoon, the unaired show became one of the most searched keywords on Naver, South Korea’s biggest Internet portal.

It is rare for a Korean TV show to cast such senior hosts. Most hosts of the nation’s top entertainment shows, including the top comedian Yoo Jae-suk, are in their 30s or 40s.

Only a handful of the hosts, such as 53-year-old Lee Kyung-kyu, are in their 50s.

It is also rare for actors to host such shows, although two “Halbae” cohosts have already shed their solemn image and attempted comic acting. Lee Soon-jae, the show’s oldest member at 78, was the star of popular sitcom “High Kick!” Shin Goo has also appeared in various TV sitcoms.

While “Halbae” defies every element of success in TV entertainment, it is among the most anticipated new shows among Koreans.

Fans expressed their affection at the “gramps,” who squabbled with each other over trivial things. “Just the teaser video alone makes me look forward to watching the show,” said a fan in an online posting.