By Korea Herald
Published : Apr 10, 2013 - 20:10       Updated : Apr 10, 2013 - 20:12
Globalization, demographic change and economic growth have led Korea to embrace cultural diversity and tolerance toward others. But biases and discrimination against foreigners remain and Koreans’ pride of ethic purity is deeply entrenched. This is the second in a 10-part series on the nation’s efforts to promote multiculturalism and on challenges in immigration laws, education, welfare, public perception, mass culture and other diverse aspects. ― Ed.


Around 2000, Korea began to witness an influx of Asian women married to Korean farmers and toiling in homes, restaurants and factories.

It marked the start of a drastic cultural change in the country where people had boasted their ethnic homogeneity despite myriads of foreign invasions over five millennia.

A decade later, the country faces a daunting challenge in its efforts to embrace the new minorities and build a more inclusive society, as domestic violence, prejudice and discrimination against immigrant women are still rampant.

Statistics show that 1 in every 10 marriages in Korea involves a foreign spouse.

Korea has a total of 266,547 households with a multicultural background consisting mostly of immigrant spouses and naturalized citizens, according to the state-run Korean Women’s Development Institute.
“Their increasing number clearly illustrates how Korea is changing from a homogeneous society,” said Kim Jeung-kun, research fellow at Samsung Economic Research Institute. 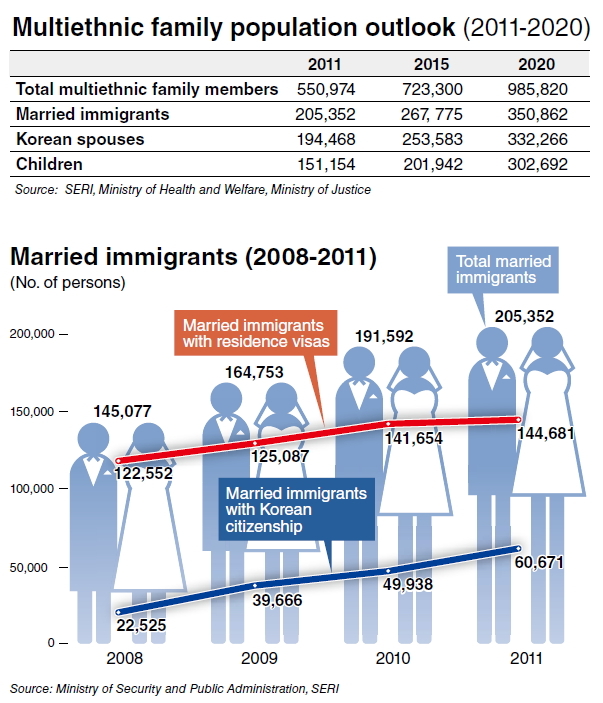 Their influx comes as an accelerating demographic change due to a low birthrate and aging population is threatening to weaken its workforce and hinder future growth.

To facilitate a smooth transition to a multicultural society, the government implemented a law on multicultural families in 2008 and launched a set of plans to help immigrant spouses and their children better adjust in Korea, including language classes and a variety of social benefits.

“The government anticipates that the children of international marriages would create ‘social unrest’ if it does not support social integration and prevent human rights problems,” said Han Kuk-yeom, representative of the Women Migrants Human Rights Center of Korea, in her report.

Despite the government’s support and the changing perception among Koreans, many still suffer from poverty and social alienation.

Nearly 4 out of 10 multicultural marriages break down within the first five years, according to the Korean Women’s Development Institute.

The incomes of multicultural families slightly improved compared to three years ago, mainly due to an increase in the employment rate. Income still remained low with more than 40 percent of the families living on less than 2 million won a month, the report said. Nearly 30 percent of families had parents working as laborers, while 18.9 percent had irregular jobs.

Some 41 percent of the surveyed families also said they experienced social discrimination, mostly at school.

“The most difficult thing for me was that Koreans have a strong bias against foreigners and immigrants,” said Ogata Keiko, an immigrant spouse from Japan.

“Every time I met people (who have biased views), I became depressed,” she added.

In a move to break the prevailing social prejudice, a growing number of immigrant spouses have started raising their voices and challenging to enter mainstream society.

In 2010, Lee Ra from Mongolia became a member of Gyeonggi Provincial Assembly, followed by Lee Jasmine from the Philippines winning a seat at the National Assembly two years later to represent ethnic minorities nationwide.

“This is very encouraging. These women have demonstrated that immigrant women are not just a social minority who rely on state support, but new leaders of society,” Han said.

Still, the cases of two women entering the political arena do not signify that the country has fully embraced the demographic changes or offered opportunities for other immigrant spouses.

“It inspired many. But it won’t be easy for members of multicultural families to enter mainstream society in the future, because they will face strong opposition from ethnic Koreans,” said Kim Yi-seon, research fellow at Korean Women’s Development Institute.

In fact, Rep. Lee of the ruling Saenuri Party faced strong opposition from anti-immigration activists when she entered the National Assembly. They called her a “poisonous weed” and urged the party to kick her out of parliament, which had never had a non-ethnic Korean member before.

“There was a color issue,” Kim said. Koreans accepted Lee Charm, a Germany-born businessman appointed by then-President Lee Myung-bak to head the state-run Korea Tourism Agency. “But the case of Jasmine Lee was different. Her case reflected Koreans’ double standard against immigrants that deter immigrants from developing countries from entering mainstream society,” she said.

Experts said the government must change its policy direction into one that supports both Koreans and multicultural families so they can embrace differences and accept their respective cultures.

“Korea’s policy is still on foreigners’ assimilation into Korean culture, rather than accepting the cultural identity of their native country,” Kim of SERI said.

“The government needs to support multiethnic families to establish their cultural assets from their origin countries, immigrant spouses to become economically active and independent, and their children with equal educational opportunities.”