Its popularity has been increasing in recent years due to its supposed antioxidant, anticancer and beauty effects.

The market for bokbunja-based food and beverages has grown nearly five-fold in seven years to about 200 billion won last year, according to the Jebba Food & Beverages Corp., a guild of bokbunja growers in North Jeolla Province.

The fruit contains four times as much anthosyanins in grapes, said Lim Dong-yoon, a professor at Chosun University’s medical school in Gwangju. 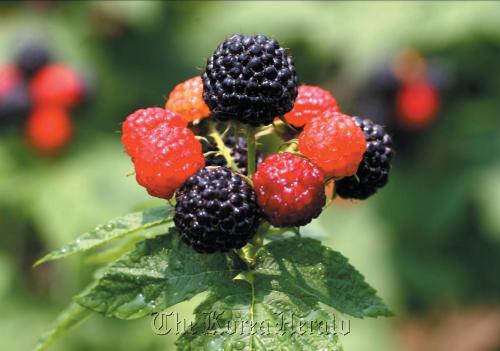 “Bokbunja has shown that it can be an effective natural medicine to treat cardiovascular diseases, cancer, and diabetes. Soon, we may establish a new drug development maximizing the effects of bokbunja.”

During the university’s experiments, cancer patients suffering familialwas adenomatous polyposis drank water containing 20 grams of black raspberry powder three times a day. After nine months, 12 out of 35 patients were found to have seen the number of their polyps halve.

FAP is an inherited condition in which numerous polyps form mainly in the first layer of large intestines. While these polyps start out benign, malignant transformation into colon cancer occurs if they are not properly treated.

“Usually the number of polyps should increase by 25 percent over nine months. But it rather decreased by 50 percent after the experiment,” Gary Stoner of the Columbus-based school’s Comprehensive Cancer Center was quoted as saying by Jebba.

“With an FDA-approved drug reported to reduce the number of polyps by 28 percent, our experiment demonstrated that black raspberries may have a stronger impact than the drugs.”

The Korean association also claims that anthocyanins, a natural pigment that gives a black tinge to bokbunja, are a good source of antioxidants, thus retraining cells from aging and being damaged.

In addition, bokbunja can also lower the risk of cardiovascular diseases due to its ample alpha linolenic acid and soluble fibers, which help reduce cholesterol and protect arterial functions, the guild says.

A 100 gram of bokbunja contains about 355 milligrams of alpha linolenic acid, which is four times as much as grapes, it notes, citing Chungnam National University in Daejeon.