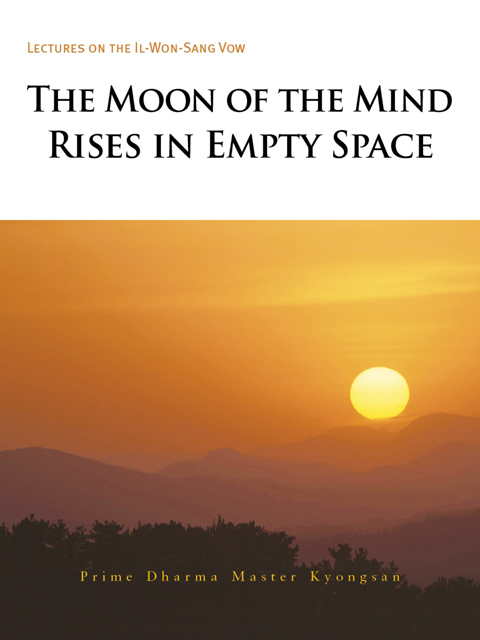 The Moon of the Mind Rises in Empty Space

Many foreigners will find Won Buddhism unfamiliar compared to other forms of Korean Buddhism. It was in fact founded in the 20th century, and is claimed to be a “reformed and modernized Buddhism” which combines Buddhism with Confucianism and Daoism.

By picking up this English-language book written by the Ven. Kyongsan, who is the fifth Prime Darma Master of Won Buddhism, one can learn about the key ideas of the religion as well as its teachings.

“Our lives and this world are the manifestations of our minds, so the knowledge of how to use our minds is fundamental and the key to leading happy and successful lives,” he writes.

Titled “The Moon of the Mind Rises in Empty Space,” the book begins by introducing the philosophy behind the Il WonSang, the “one circle image” that represents the object of faith and model of practice in Won Buddhism.

“Il means ‘one,’ which is unique and has no other,” Kyongsan writes.

“This means that the truth is singular. Won means that while it is one, it includes all things. This means that within it exists awesome power, all manners of blessings. Sang indicates that even though all things have form, the truth has none. We must awaken to the existence of this Il-Won-Sang truth and make a firm vow to possess that truth.”

The rest of the book focuses on the ways in which one can embody that truth in his or her everyday life. They include knowing how to use one’s mind by forming “good” habits, and making a “noble and firm” Il Won Sang vow to become a Buddha by singing the mind prayer.

This book isn’t an easy read, as it is a collection of the Ven. Kyongsan’s lectures. It is more for readers who have some knowledge in Korean Buddhism, and those who’d like to learn more about the diverse teachings and forms of the religion.

The Ven. Kyongsan, the fifth Prime Dharma Master of Won Buddhism, was born in 1940 and started practicing the religion at the age of 20. He majored in Won Buddhist studies at Wonkwang University and graduated in 1968.

Before taking the position as the fifth Prime Dharma, he served as President of Youngsan College of Seon Studies, and Director of the Jung-ang Training Center of Won Buddhism. He has written numerous books on his faith, including “The Diamond Sutra in Everyday Life,” and “Taming the Ox: Our Mind and Hill of Freedom.”