JAKARTA, Indonesia, May 13, 2022 /PRNewswire/ -- NFT has become a hot topic of discussion widely, especially after many NFTs were sold at fantastic prices, such as Beeple's work entitled "Everydays: The First 5000 Days" which sold for $69,346,250, equivalent to Rp 9 Trillions. Inspired by Beeple, the NFT made by an Indonesian, Ghozali, also managed to gain popularity and sold tens of millions of rupiah. Currently, more and more art performers and connoisseurs in Indonesia are starting to become aware and understand the NFT, this is indicated by the emergence of many NFT communities in Indonesia whose members have reached thousands and even tens of thousands when viewed from the social media accounts of the community. Asosiasi Blockchain Indonesia's Chairwoman, Asih Karnengsih conveyed "the need for literacy related to the implementation and benefits of blockchain technology that can contribute to economic development in Indonesia, for example NFT which can help artists in Indonesia get recognition and rewards or their potential to contribute to the virtual economy."

However, seeing this phenomenon, questions and concerns arise, mainly about whether this NFT is just a trend or will it become a bubble, a condition in which an asset that has high value will quickly decline and disappear from the market.

It is entirely possible that NFT will become a 'bubble' if the following things continue to happen and are not immediately addressed. What are the things that can make NFT a bubble?

The NFT market has actually started to look settled in recent times. According to Bloomberg, the average trading value of NFTs has fallen drastically in recent times, dropping from a record $6,900 at the start of the year to under $2,000 from data tracker NFT NonFungible.

The main NFT sales also fell significantly in the past month, according to data recorded, NFT sales fell 29% and 1.17% sales in USD. Meanwhile, the main sales, which are sales that took place on the NFT project website, fell 73%, and decreased 49% in USD .

According to Financial Times data, daily transaction volume for NFT on OpenSea fell 80% to $50 million in March, compared to $284 million in February. 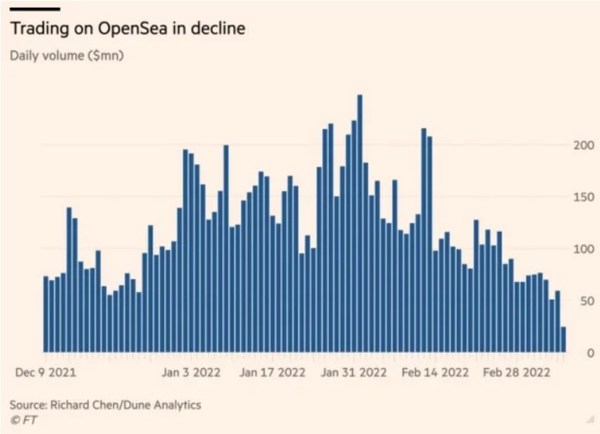 On OpenSea, the NFT tracker DappRadar also shows a decrease in the number of traders and overall volume. Overall trading volume has fallen nearly 67 percent in the 30 days of March. to $2.6 billion, with traders down 23 percent to 489,796 users.

What's even more remarkable is that, even during the "great NFT sale" millions of dollars and cryptocurrencies still have strong circulation on OpenSea every day. People are still spending an average of thousands and hundreds of thousands of dollars on NFT, but research shows that it has declined.

The decline could also be attributed to increased scrutiny from US regulators. According to a Bloomberg article, the Securities and Exchange Commission (SEC) stated this week that it is investigating whether NFTs are securities and should be regulated.

In addition to the declining value, NFT also still has negative sentiments, for example for money laundering. With NFT money laundering can be easily carried out because buyers and sellers cannot be fully tracked if they use an anonymous identity.

Has No Fundamental Value

It must be admitted that there are still many NFTs that do not have a clear fundamental value and usefulness. It's just a random image that a user bought because of FOMO. If the NFT continues like this, it is very likely that a bubble will occur, and NFT's work that has a clear function will also be dragged into this negative sentiment. In the end it will destroy the NFT market.

The impact of the NFT bubble if it occurs will not only have an effect on NFT, but can spread to crypto assets in general, because buying NFT requires other crypto as a transaction tool.

The bigger the bubble, the more widespread it will spread when it bursts.

"This is perhaps the apotheosis, the pinnacle of the all-bubble paradigm. This worries me a lot even if I fully understand the dynamics that drive young people in particular to buy NFTs," said Michael Every, Rabobank's head of financial markets research for Asia-Pacific.

To reduce concerns about the NFT bubble, Evan Cohen, the founder of Vincent, also gave a suggestion.

Until now, NFT is still full of speculation, these three things show that this industry is not stable and is surrounded by negative sentiments that can damage the ecosystem and turn NFT into a bubble if the NFT industry activists don't immediately address it.

This article was previously published on Coinvestasi.