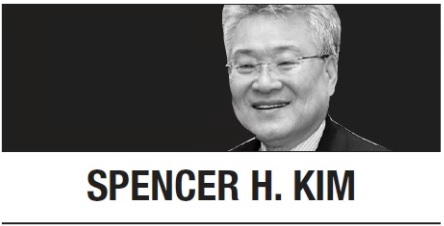 “We must be able to think about unthinkable things because when things become unthinkable, thinking stops and action becomes mindless.” So spoke the late US Sen. William J. Fulbright, who founded the famous Fulbright scholarships under which so many have been able to study in foreign countries and expand their horizons. Fulbright has always struck me as an unusually wise man. So I try to follow his advice.

Let me tell you my conclusion from trying to think the unthinkable: If the US, South Korea, Japan, China and the rest of the world want North Korea to denuclearize, they must be willing to give Kim Jong-un what he wants most of all -- security for him and his regime.

Nuclear weapons are, in Kim’s mind, a means to regime security, not an end in themselves. Therefore, if his regime becomes more secure without nuclear weapons than with them -- in North Korea’s terminology, the outside world’s “hostility” to Kim ceases -- he can denuclearize.

I can hear the refrain. But, but, Kim is a dictator and his regime is odious. We need to force him to denuclearize and we must force him to give greater respect to human rights. It’s true that his regime is odious, but regardless, the fact is there is no way to force him to denuclearize, or give greater respect to human rights for that matter. “Forcing Kim” is the mindless action that follows the unwillingness to think the unthinkable. Round and round we will mindlessly go and never get anywhere. And will human rights improve more under an insecure regime, or a secure one linking more to the outside world?

Let’s look at what Kim wants and what we want, and think through if there is a way for him to get what he wants, and us to get what we want -- even if we have to think the unthinkable along the way.

Let us begin with some sympathy for Kim’s situation. He has been dealt a weak hand. His is the smallest, poorest and least-loved country in Northeast Asia, by far. Kim faces four existential threats to his regime -- in the real meaning of that word, the end of his regime’s existence.

First, and always, China. Chinese high-handedness and Korean prickliness go back millennia. The saying goes that when the door is open, Pyongyang curses America; but when it is closed, it curses China. China would love a pliant North Korea that is a de facto Chinese province. North Korea could long ago have inextricably linked its economy to China’s and become a relatively prosperous economic appendage. But with economic integration would come political “advice” that could not be ignored. China is a relief valve from sanctions since it can keep North Korea on life support as long as it wants, but it is also an existential danger if the reliance becomes permanent.

Second, the domestic threat. A coup? Widespread unrest if the economy totally shatters? Or, conversely, deep disappointment following rising expectations? Even a totalitarian regime like Kim’s cannot rely only on the brutality of the secret police; it also needs a success narrative that creates at least a modicum of loyalty and willing compliance.

Third, the United States, a constant military threat. And, as the North Koreans put it, always instigating the “international cooperation system” to “strangle” North Korea, at the UN and through international sanctions.

Fourth, the complex sociological and psychological, and even military, threat from South Korea. The old propaganda that the North was self-reliantly prosperous while Southerners were starving and slaves to the Yankees has long been shattered. The siren song of Southern absorption has arisen in people’s minds -- in North and South.

Kim is stuck in an unending game of juggling the four existential threats. Whichever one is closest to falling to the floor is the one he has to concentrate on next. Nuclear weapons are a way to give Kim some agency to deal with his threats. But they bring as many new problems as they solve old ones. And none of his threats are permanently removed by his nuclear weapons.

What conclusions might we draw if we look at what we want and what Kim wants, and how to get there -- including being able to think what is unthinkable, and break out of a circle of mindless action?

First, it will require long-term engagement, over years, decades. It cannot be in fits and starts. And it has to stay rigidly on target -- Kim regime security in return for denuclearization and cooperation that enhances peninsular and regional security.

Second, whatever process evolves, be it in implementing a big comprehensive “deal” or a series of interlinked incremental deals, final North Korean denuclearization is going to be at the end, not the front. Kim will want to retain some capability until he has assured himself that he is better off in the new world than he is in a nuclear standoff.

Third, the process of coordinating US and South Korean negotiating positions vis-a-vis North Korea, with presidential elections every few years bringing new administrations in either country, is too cumbersome. Someone has to be the sole leader that the North can come to believe is a reliable partner, designing a long term strategy that the North can come to accept. It has to be Seoul. And Seoul has to be given the power to modulate sanctions, relaxing them or removing them as it decides necessary. The US and the international community have to be persuaded that they trust Seoul to be the lead interlocutor with the North.

Fourth, Kim and the North have to be persuaded that Seoul is the best partner in addressing all four of their existential threats. South Korea can help with the economic development and diversification that both ends reliance on China and makes domestic unrest due to deprivation unlikely. South Korea can be the brake on any US military adventurism. Seoul can use its status to pave the way for better acceptance of North Korea on the international stage. Seoul can declare a policy of no absorption and only mutually agreed reunification when the time comes.

Fifth, before North-South can make real progress, there has to be “South-South.” That was the excellent advice of Volker Ruehe, one of the architects of German reunification, when he spoke to the Pacific Century Institute at its 25th Anniversary dinner. The key to German unification was when the progressive and conservative parties agreed on “Ostpolitik,” that West Germany would pursue a policy of magnanimity toward the East no matter which party was in power so that the East could feel secure in dealing with the West without fear of constant policy flip-flops. When the time came, German unification was not by force, but by choice. The next South Korean president has to be the “South-South” president, forging an enduring bipartisan policy that can withstand election flip flops.

The next president of South Korea, whoever he or she is, will have a big task in dealing with North and “South.” Difficult? Yes. But I believe if he is willing to think the unthinkable he can shake free of the mindlessness that passes for action but keeps Korea frozen in inaction.


Spencer H. Kim
Spencer H. Kim is CEO of CBOL Corp., a California aerospace company. He is a co-founder of the Pacific Century Institute and a member of the US Council on Foreign Relations. He was appointed by President George W. Bush to represent the US on the APEC Business Advisory Council 2006-08. He was a resident fellow at Harvard’s Ash Center for Democratic Governance and Innovation 2012-13. -- Ed.