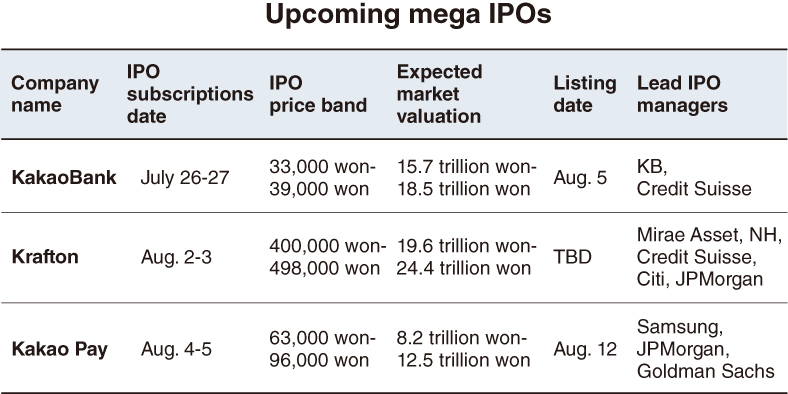 Kakao Pay set the date for its initial public offering for the first week of August, immediately trailing the much anticipated listings of Krafton and KakaoBank.

On Friday, Kakao Pay said it had submitted its IPO application to the country’s stock operator, Korea Exchange. The financial technology arm of mobile giant Kakao said it seeks to raise up to 1.6 trillion won ($1.4 billion) when it goes public Aug. 4-5.

Just one week before Krafton and Kakao Pay, KakaoBank, the country’s second internet-only bank, is poised to receive subscriptions July 26-27.

Market watchers see the schedule of the three huge IPOs coming in sequence as a rare occurrence that creates a battleground where they will have to compete for investors’ interest and funds.

“Big IPOs tend to avoid each other in terms of the timing of listing in consideration of success. It is rare to see big IPOs with company valuations exceeding 10 trillion won to be concentrated within one or two weeks,” an industry expert said Sunday.

Krafton’s IPO was originally expected for July 14-15, but the company had to delay the event after financial authorities asked the company to revise the application and subscription price ranges.

Meanwhile, Kakao Pay said that it has decided to distribute its stock equally to all IPO subscribers, becoming the first company to do so.