The group started with Ahri, a K-pop artist who made her debut in 2013 and shot to fame in less than three years. But like many artists, Ahri encountered troubles with her agency. Instead of going with the flow, she sought out and recruited current bandmates Kai’Sa, Evelynn and Akali so they could work together to make the music they wanted to make.

Upon its debut the band dominated the music charts with “POP/STARS,” becoming the fourth K-pop girl group to rise to the top of Billboard’s World Digital Song Sales chart. The video, which garnered over 100 million views in just a month, now has over 407 million views.

Before unleashing its debut album Nov. 6, the group dropped two prerelease singles: “THE BADDEST” in August and “MORE” in October. Not surprisingly, both singles were huge hits, racking up millions of views on YouTube in less than a week and generating anticipation for what was to come. With three other tracks — for “VILLAIN,” “DRUM GO DUM,” and “I’LL SHOW YOU” — the album made the Billboard 200 album chart, ranking 176 on Nov. 22.

Over the past two years, the band has collaborated with artists from around the world. Fellow K-pop girl group Twice and pop singers Bea Miller and Madison Beer — both of whom also collaborated on “POP/STARS” — joined forces for K/DA’s first album. It even scouted guest member Seraphine, who also works as a producer and lyricist.

And just a week before the album debut, on Oct. 31 the group performed live for the second time at the 2020 LoL World Championships Final — a lucky opportunity in this era of cancellations forced by the pandemic.

Gifted a monthlong vacation by agency Riot Games Music to reward its hard work, the quartet is now back. Its members recently sat down to talk about themselves and their music with The Korea Herald.

Akali: Hi, we’re K/DA! We’re an international girl group making hard-hitting music that we love. K/DA is actually a term that comes from gaming: it stands for kill/death/assist ratio. Basically, it’s how strong you are.

Ahri: We put our own meaning on the name, too. For us, K/DA also stands for “kaleidoscope artists.” Each of us has different colors — our personalities, styles, strengths — but we bring those differences together to form something beautiful, like a kaleidoscope. Each twist reveals a different side.

Q. This is the first time you’ve released new music in two years. Was this a planned comeback? What parts of the album did each band member work on the most?

Kai’Sa: We took our time planning our comeback because we wanted to do it right. After “POP/STARS,” we took some time on our own to explore our interests, and then reconnected to write “ALL OUT” together based on what we learned.

Evelynn: I handled the fashion. K/DA needed to come back with a fresh new look, so I styled each member and designed our outfits for the pre-release, performance, and EP release.

Kai’Sa: Choreography. I also worked on the unique concept for this year.

Ahri: I worked mainly on writing lyrics, and I helped organize collaborations with the talented artists who lent their voices to our EP.

Akali: I wrote the rap sections in “THE BADDEST” and “MORE,” along with general songwriting stuff.

Q. Tell us about the prereleased singles “THE BADDEST” and “MORE.” I know that both made smash debuts, landing respectively at No. 1 and No. 2 on Billboard’s World Digital Song Sales chart upon release. Why were these two songs released ahead of the album?

Akali: We started with “THE BADDEST” because it’s like a hype track. It’s this energetic intro to get everyone excited about K/DA. Then we dropped “MORE.” because it’s what this year’s comeback is all about. We’re giving you some more.

Kai’Sa: “MORE” has two sides to it. On one level, it’s a response to our fans, who were asking for more. After “POP/STARS,” we wanted to go bigger and come back better than ever. But it’s also a message; it’s who we are as K/DA. We’re more when we’re together.

Q. Guest member Seraphine joined the band just for the album! Tell us how Seraphine was discovered and what kind of synergy she makes with the quartet.

Ahri: I discovered Seraphine when Evelynn showed me her cover of “POP/STARS.” She was this talented young songwriter just starting out, with a lot of optimism and a pure love for music. At first I just wanted her to help us produce the album — but she ended up becoming like a little sister to us. I think we can all see bits of ourselves in her. 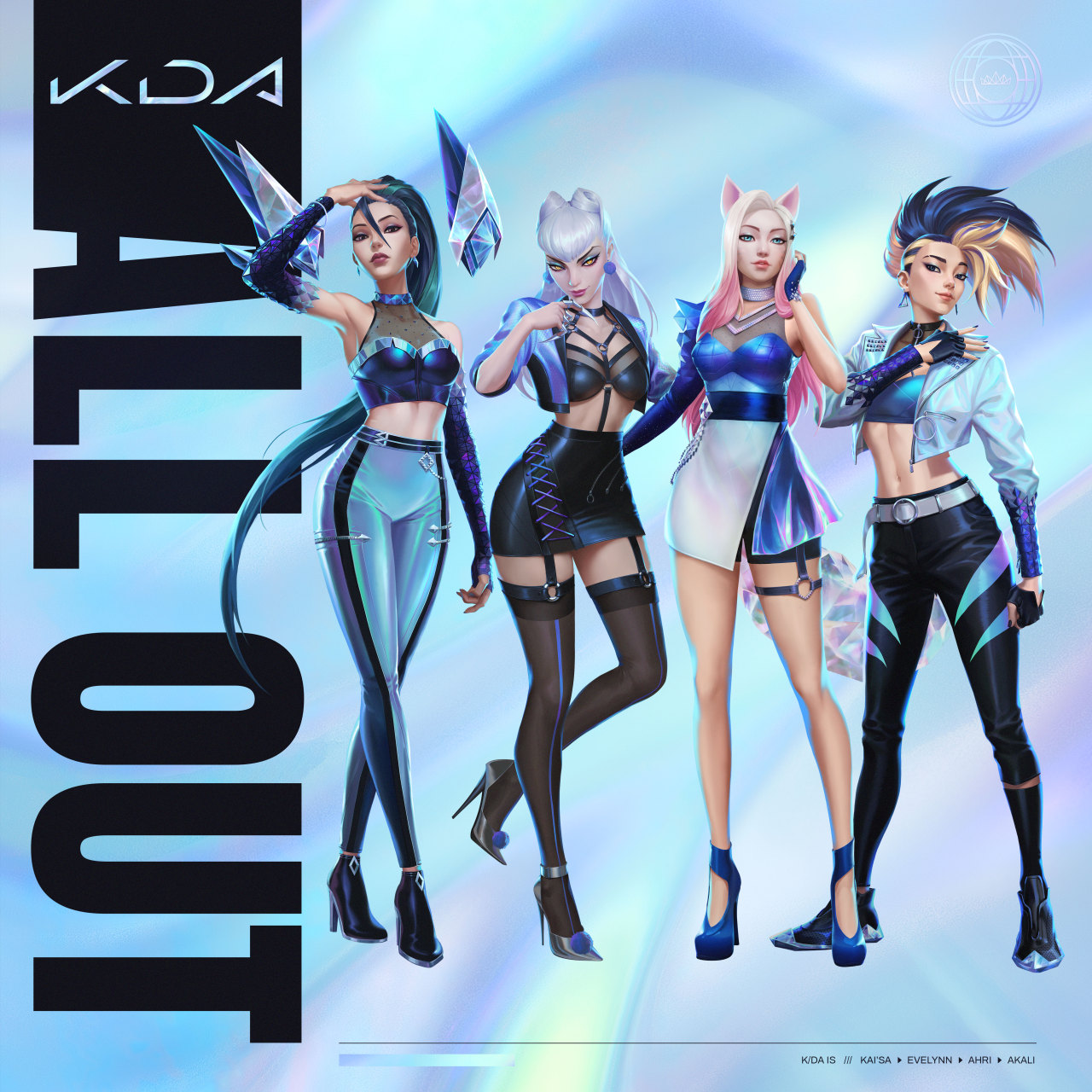 "ALL OUT" album cover image (Riot Games)
Q. “MORE” has garnered almost 55 million views and “THE BADDEST” some 36 million views. How was the making of the music videos?

Evelynn: We started with a lyric video for “THE BADDEST,” and we all wore black for the pre-release. The video was centered around motion and typography, mainly monochrome cut through with iridescent patterns. We wanted the concept to be iconic and striking, hinting at what was to come.

The “MORE” music video takes you deeper into the heart of K/DA. It’s set in a modern skyscraper, and each story has a room that reflects a different member’s world. The iridescent pattern takes center stage alongside Akali’s neon dojo, Ahri’s throne room, my classical statue garden, and Kai’Sa’s zero gravity room. By the end, Seraphine joins us as we rise to the top together. The final result was breathtaking. I adored working with all the props and settings.

We also have some unique concept videos for “VILLAIN,” “DRUM GO DUM,” and “I’LL SHOW YOU.”  Be sure to check them out.

Akali: The EP and the MV were a lot of hard work, but working together was so much fun. Lots of late nights in the studio with ramen. And we mess with each other all the time. I kept trying to make Seraphine laugh when we were shooting “MORE,” and one of the takes actually made it onto the video.

Q. It’s no stretch to say that K/DA was the first to show the explosive synergy between K-pop and American pop music. How would you differentiate yourself?

Kai’Sa: Thank you! I’m not sure if we were the first, but we definitely take deep inspiration from both genres. We have a lot of passion for both K-pop and American pop, and I think it shows.

Ahri: I’d say we’re not just one genre. The four of us come from different musical and cultural backgrounds, and we bring that into our music. Akali and I speak Korean, but K/DA isn’t just K-pop, it’s global pop.

Q. We heard you’ve officially named your fans the “Blades” and got yourself a light stick, just like other K-pop groups. Congratulations.

Akali: Thanks! It’s super exciting. We’re grateful to have such amazing fans. We came up with the fan name based on the line in “POP/STARS”: “I’m a goddess with a blade.” Our Blades are right by our side, ready to fight with us.

Q. Due to the pandemic, your comeback seems to have gone by very quietly and this may have disappointed some fans. Are there any events planned?

Kai’Sa: Yeah, this year was tough. I wish we could have seen our international fans in person, but it was important that we all stay safe. It was fun connecting on social media in new ways this year. We had one performance at Worlds, though we’re not planning any events in the near future. But be on the lookout — who knows what we’ll do next?

Q. You recently performed at the opening ceremony of the 2020 World Championships Final. How did you feel finally performing onstage?

Evelynn: It felt fantastic being on stage with K/DA again after two years. The crowd was spectacular and the atmosphere was simply exhilarating. There’s always something special about live performances.

Q. The album contains some star-studded collaborations! How was the experience?

Ahri: Working with our collaborators went really well this year! There were so many talented voices on our EP, I felt so lucky to hear them all. And I especially enjoyed singing with Twice; they provided the perfect energy for “I’LL SHOW YOU.”


Q. Is there anyone you’d like to collaborate with in the future? Perhaps someone from the Riot Music Group?

Evelynn: There are so many artists we’d want to collaborate with. For one, I adore powerful and confident groups, which K-pop is not lacking in. But there are also individual acts too that exude our similar energy. But who knows what the future will bring and whose paths we’ll be able to cross with.

Akali: For sure, it’s definitely possible. Maybe if we’re lucky, we’ll get to play with Pentakill someday.

Q. Finally, to each of the members — what are your future plans, both as musicians and individuals?

Ahri: I want to see how far we can take K/DA. We’re definitely not done, there’s so much to explore.

Evelynn: I’m with Ahri on that. But I’d love a vacation, somewhere away from the limelight, before we jump back in.

Kai’Sa: There’s so many places I still want to travel to. And my dancing could always use refinement.

Akali: New collabs, for sure. Maybe I’ll hit up True Damage again? I’ve always got projects on my mind. But I’ll always come back to K/DA. They’re my family.