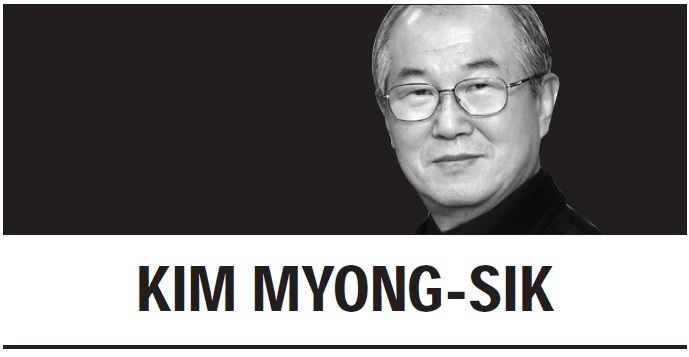 History shows that even raging wars do not restrain politicians’ fervor for power. The nation is now at war against the new coronavirus. Guns are not being fired, but so many warriors in imperfect protective gear are fighting an invisible but ubiquitous enemy while casualty numbers are updated on a daily basis. Despite the atmosphere of public desperation and panic, politics goes on in full vigor ahead of parliamentary elections.

During the Korean War, President Syngman Rhee carried out the first rewriting of the Constitution to change the presidential election system from an indirect vote in the National Assembly to a direct popular poll. While police and soldiers surrounded the legislative building in a state of emergency, the amendment bill was passed in a standing vote. Shortly after the July 1953 cease-fire, another constitutional amendment was made to enable Rhee to seek a third term.

In 2020, after seven decades and multiple political upheavals, this republic has been recognized as one of the more stable democracies in East Asia. Yet party politics, the core of the democratic system, remains at a humiliating level in this country because politicians have yet to learn the art of fair play. And a new irrational election system, the product of the ruling group’s shortsighted pursuit of a monopoly on power, is feared to produce a legislature severed from people’s desires.

Nearly 50 political parties have registered with the Central Election Commission as of this week, all seeking to enter the National Assembly through the nationwide vote April 15. However, quite a few of them have not nominated candidates for any of the country’s 253 electoral districts but have only prepared proportional representation lists. They intend to share the 47 seats according to the percentage of ballots they would have collected in a parallel vote on parties.

Most ridiculous of all, at least two of these parties define themselves as “satellite parties” -- of the ruling Democratic Party and the main opposition United Future Party. If some of their proportional representation candidates win parliamentary membership, their parties will promptly expel them just to pave the way for their entry into the “mother parties.” This trickery is required because proportional representation lawmakers lose their Assembly membership if they voluntarily leave the parties they belonged to when they got elected. Having been expelled, they can keep their seats and rejoin the newly merged party.

Both the ruling and the main opposition parties have hatched bogus parties to make the best use of a new parliamentary election formula, called the “semi-mixed member proportional system.” The opposition United Future Party had vehemently opposed the new system when the ruling party proposed it as a decoy to secure the cooperation of minor groups in what the UFP called a “grand scheme to solidify its grip on power” -- chiefly through strong control of the law enforcement process.

Foremost in the strategy was the creation of a super-powerful body with a jurisdiction covering the higher echelon of the prosecution and other investigation apparatuses. The Democratic Party devised an electoral system that promises bonus seats to small parties -- and these groups, allied with the ruling party, passed the bill, ostracizing the UFP. Thus, a weird election formula has been introduced, with an extremely complicated calculation method for the distribution of proportional representation seats.

The main opposition UFP, however, was quick to form a satellite party so as not to lose out on seats allotted for proportional representation. The Democratic Party, betraying the minor parties it had aligned itself with to pass the legislation, promptly followed suit, seeking to assemble a hodge-podge of leftist groups into a satellite party of its own. As the two major parties engaged in these inglorious tactics to win more Assembly seats, numerous power-hungry politicians thronged to the election management office to register new parties with proportional representation lists.

The nomination processes in both political camps were mired in disputes over moves to replace members of the old guard with fresh faces from various professional areas. In the hurriedly formed proportional representation parties, lists of nominees included “nobodies” with few qualifications other than involvement in youth or women’s rights advocacy. This irked the leaders of their “mother parties.”

The darkest feature of the 2020 election, of course, is the reformed electoral system. Parties that earn more than 3 percent of the vote will first share 17 of the 47 seats set aside for proportional representation. The devil is in the distribution of the remaining 30 seats reserved for “compensation” of parties that won districts short of the number they proportionately deserve from the votes on party lists. Parties that picked up a greater share of constituencies than their share of the proportional vote get none.

Yet the ratio of votes won by each party is not fully factored in when dividing up the 30 seats. If a minor party wins only two seats from districts, for example, but gets 5 percent in the parallel vote on party lists, some seats are subtracted from the 15 it would otherwise be entitled to out of the total 300 seats under a true proportional representation system. Election officials will have a long night calculating the winners for each party.

When the formal campaign starts, the conservative opposition will turn the election into a midterm judgment of the president’s performance. It will point to economic failures in connection with President Moon Jae-in’s income-led growth policy, the higher minimum wage, the move away from nuclear power, the favor his administration has shown labor unions and the restrictions affecting corporations. The ruling camp will defend itself primarily by saying the opposition is not ready to take over and by asking for more time to accomplish its liberal reforms.

The main opposition will caution the electorate against granting a two-thirds majority to an alliance composed of the ruling party and minor opposition groups in their quest for a constitutional amendment that could perpetuate leftist rule. Aware of the negative effects of the COVID-19 disaster, the ruling party will be desperate to deter the opposition from winning enough seats to initiate an impeachment motion against Moon, who faces the bitter criticism of having done nothing positive during his three years in office.

Whatever the focus of the campaign may be, one stinging blow to the ruling camp will be the ballot paper itself, which is expected to be some 75 centimeters long -- long enough for all the proportional representation lists of the 50-plus parties, the result of the Democratic Party’s gambit to keep its grip on power.