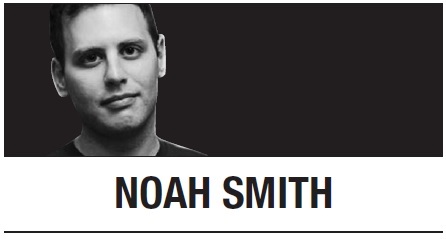 In 1964, speaking at the University of Michigan, President Lyndon Johnson called for the US to become a “great society.” That term came to be synonymous with the Johnson administration’s raft of antipoverty programs, sometimes known as the War on Poverty. The Great Society initiative led to the creation of Medicare and Medicaid, the modern version of food stamps, Head Start, various jobs programs, expansion of many kinds of Social Security benefits, urban renewal spending and a vast array of other social programs.

Many now believe this War on Poverty was a failure. Among conservatives, it’s almost an article of faith that LBJ’s welfare state fostered a culture of dependence that trapped people in the very poverty it was meant to eliminate. Meanwhile, on the left, many feel a sense of frustration that poverty is still with us, stubbornly stuck at about a seventh of the population.

But both those who think the Great Society was a fiasco and those who think it didn’t go far enough ignore the very real improvements it brought about. Although poverty persists in the US, the kind of deep, grinding material deprivation that existed before Johnson’s presidency is much less common now.

First of all, according to official measures, poverty declined dramatically in the decades after LBJ’s Great Society speech. For black Americans, the poverty rate fell more than 10 percentage points, and for white Americans it fell almost as much.

Not all of this is because of the Great Society, of course; the late 1960s were a time of rapid economic growth. But later periods of almost equally rapid growth didn’t lead to similar reductions in poverty.

But official poverty measures don’t capture the whole picture. Although they include some sources of government income, such as unemployment and Social Security, they exclude lots of others, including payments under the earned income tax credit and child tax credit, housing vouchers, food stamps, Medicaid and so on. In other words, looking at the official poverty measure to evaluate the Great Society leaves out many of those very same programs.

The Census Bureau has created the Supplemental Poverty Measure, as well as various other benchmarks, to get a better picture of the number of poor Americans. But making long-term historical comparisons with these methods is tricky because the standard of living used to set the poverty rate rises over time. A given amount of food, shelter and other material goods that would have seemed acceptable in some bygone age might seem pitiful by today’s standards; that our standards for material comfort have risen so much makes the Great Society seem less effective than it really was.

Economists Richard Burkhauser, Kevin Corinth, James Elwell and Jeff Larrimore attempted to solve this problem. They developed their own poverty measure, which tries to include every identifiable government benefit. They then set the poverty threshold so that the rate in 1963 is very close to the official poverty rate at the time, which was about 20 percent.

Burkhauser and his colleagues’ poverty measure drops from 19.5 percent in 1963 to only 2.3 percent in 2017 -- a huge reduction and much larger than the official decrease. Much of the difference between their number and the official rate is due to the inclusion of welfare programs as income. Even when they exclude health insurance from their calculations -- because rising insurance costs might represent overpricing rather than real improvements in health care -- the poverty rate falls to 4.6 percent.

Most of the decline in the economists’ measure happened in the late 1960s and 1970s. Interestingly, although the official poverty rate stopped falling after 1973, when US economic growth slowed, the researchers’ measure continued falling throughout the ’70s, suggesting that government programs were responsible for the earlier decreases.

In other words, taking a bird’s-eye view of the economy, the Great Society worked. Material deprivation of the kind that was still common in midcentury America -- a desperate lack of food, shelter and basic medical care -- is much rarer today. That’s probably one reason political unrest usually doesn’t explode into violence the way it once did.

The lesson is that government redistribution works. Although some social programs have been poorly designed -- for example, the Aid to Families with Dependent Children program probably discouraged people from working -- most government benefits alleviate true hardship. On that basis, the conservative argument that welfare traps poor people in poverty is simply wrong.

Of course, that doesn’t mean that doubling down on LBJ’s approach is appropriate now. Modern poverty is often more about insecurity, risk, and a lack of personal dignity than it is about absolute material hardship. Addressing that will require new and innovative approaches toward poverty reduction. But the successes of the past, and the importance of government programs for lowering poverty in the present day, need to be acknowledged.