The Organization for Economic Cooperation and Development (OECD) on Thursday slashed its growth outlook for South Korea's economy this year to 2 percent amid a slowdown in global trade.

"Economic growth will remain subdued, as the global slowdown and trade tensions hold back exports, while high uncertainty weighs on investment," the OECD said in its report.

The OECD said a gradual recovery in global demand for semiconductors and expansionary fiscal policy will support the economy.

Semiconductors account for nearly one-fifth of exports from South Korea, home to Samsung Electronics Co., the world's largest memory chipmaker, and its smaller rival SK hynix Inc. South Korea accounted for more than 60 percent of the global memory market in 2018.

The latest downward revision came amid concerns that Asia's fourth-largest economy may not achieve its revised growth target this year as exports have slowed in the face of the ongoing trade conflict between the United States and China and a trade row between South Korea and Japan. 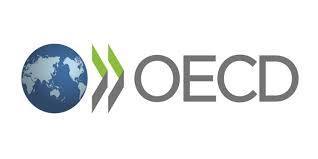 The country's exports plunged 14.7 percent on-year to US$46.78 billion in October, extending their slump for the 11th consecutive month due to weak prices of semiconductors and mounting uncertainties surrounding global trade.

The OECD also said it expects South Korea's central bank to further ease monetary policy in 2020, as headline inflation will remain below the 2 percent inflation target.

Last month, the Bank of Korea slashed its policy rate by a quarter percentage point to 1.25 percent -- matching the lowest level previously seen in June 2016.

"The fiscal expansion of over one percentage point of GDP in 2020 provides a welcome stimulus, but sustaining long-term growth in the face of rapid population ageing will require structural reforms to boost productivity and create better jobs," the Paris-based organization said.

The expansionary budget -- which needs parliamentary approval -- represents a 9.3 percent hike from 2019 and marks the second straight year that the budget proposal has risen by more than 9 percent. (Yonhap)