By Jung Min-kyung
Published : Aug 12, 2019 - 16:24       Updated : Aug 12, 2019 - 16:24
South Korean tech giants Samsung Electronics and LG Electronics were among the companies that were granted the greatest number of patents in the US last year, falling within the top 10 and rubbing shoulders with IBM, Microsoft and General Electric, a report by a US patent association showed Monday.

Samsung ranked No. 2 with 5,836 registered patents in the US, surpassed only by US IT giant IBM, which filed 9,088, according to the Intellectual Property Owners Association.

The Korean IT company has maintained the No. 2 spot on the “Top 300 Organizations Granted US Patents” list for 12 consecutive years.

LG came in at No. 7 with 2,473 patents, having moved up one notch from the previous year. LG has remained in the top 10 for three consecutive years.

US firms GE, Intel and Alphabet were sandwiched between Samsung and LG, respectively ranking fourth, fifth and sixth. 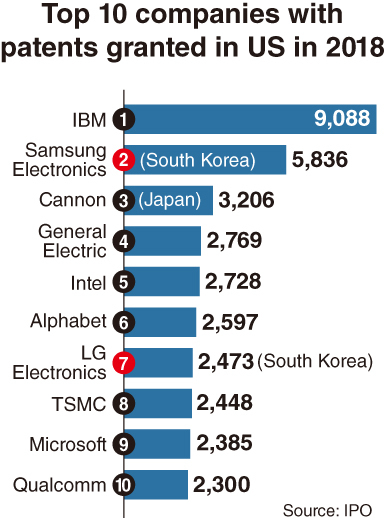 Of all the countries represented in the top 10, the US was home to the greatest number of patent-rich firms with six companies. Korea came second with two, while Japan and Taiwan shared the No. 3 spot.

Tokyo-based camera maker Canon was the only Japanese firm included in the top 10. This reflects a major shift in trends since 2008, when Japan dominated the top 10 list with six firms including Panasonic, Hitachi and Toshiba.

Samsung Display, Hyundai Motor, SK hynix, LG Display, LG Chem and LG Innotek were among the other major Korean companies that fell within the top 100.

Overall, 307,759 patent applications were filed with the US Patent and Trademark Office in 2018, an on-year decline of 3.5 percent.