For Lee Hyun-song, 26, originally from Busan, Tuesday morning was a nightmare.

“My entire family woke up at six in the morning to get a train ticket for the Lunar New Year holiday period for me, but none of us succeeded,” Lee said.

As the holiday train tickets sell out in a matter of seconds, Lee said she had come up with a detailed plan for a successful booking. She searched for the train schedule that fits her plan, wrote it down on a piece of paper and trained her fingers for fast clicks. She even went to a PC room for the high-speed internet connection.

“I clicked the ‘booking’ button the moment the clock hit 7 a.m., but there were some 20,000 people already on the reservation site ahead of me. It’s been seven years since I moved to Seoul, but holiday train ticket reservations stress me out every time,” Lee said.

Lee is one of many Koreans who madly click the button during the booking period. The keyword “Korail” topped Naver’s trending bar on Tuesday morning, while “2019 Lunar New Year’s Day train ticket” or “(Digital) Clock” appeared on the bar as well.

Korail allocated 70 percent of the holiday train tickets for online sale, but the quota usually sells out instantly. On Tuesday morning, the number of people using the holiday ticket reservation website at the same time peaked to 150,000, according to Korail. The difficulty in securing tickets has led to the process being called a “Reservation War” or “Class Registration for all Koreans,” comparing it to the fierce competition in signing up for college classes online.

On Tuesday morning, it was easy to spot people seeking the remaining 30 percent of the tickets, which are sold at stations and travel agencies, at Seoul Station.

“My kids and I tried to buy the tickets online this morning, but we all failed. I couldn’t get the tickets that depart at the time we had wanted, but I luckily bought four tickets bound for Daegu at the ticket office,” a 56-year-old businessman Lee Myeong-jin told The Korea Herald at the Seoul Station.

Meanwhile, the space in front of the ticket office was dotted with backpacks and cardboard boxes as of 10 a.m. Tuesday, marking the seats for people who are trying to buy tickets on Wednesday morning. 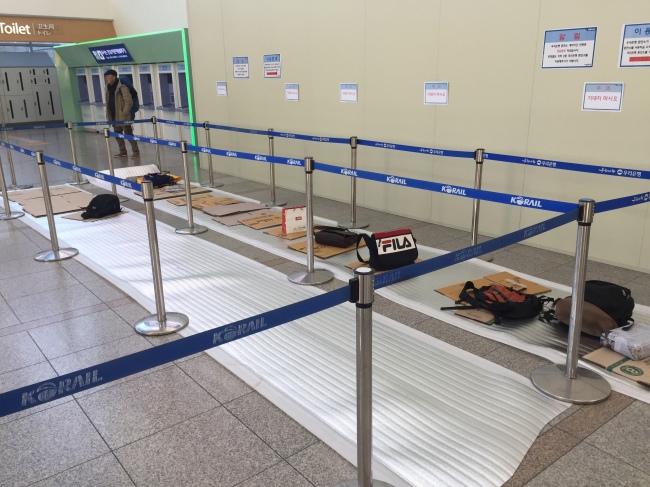 “My son will try (to buy the tickets) online tomorrow morning at home, but I’ll spend tonight at the station in line just in case (he fails,)” Park Jin-soo, 55, looking to travel to Yeongju, North Gyeongsang Province, told The Korea Herald.

Park has done so every holiday season for the last 10 years. He has prepared six hand warmers and a thick padded coat, gloves and warm pants to endure the cold night at the station.

For the people waiting in line, Seoul Station staff offer cups of coffee and hot water, and the station is kept open all night.

Korail tickets for Honam Line, Gangneung Line, Jeolla Line, Janghang Line and Joonang Line will go on sale online from 7 a.m.-3 p.m. Wednesday, and will be available offline from 9 a.m. to 11 a.m. on the same day. Tickets for the Gyeongbu Line, Gyeongjeon Line, Donghae Line and Chungbuk Line were sold Tuesday.

Bookings for the SRT tickets during the holiday period will open on Jan. 15 and 16.