[Video] Jinyoung at the center of body-swapping comedy

Such is the plot of the comedy-drama film “Inside Me,” where Jinyoung plays Kim Dong-hyun, a bullied, introverted high school student; and veteran actor Park Sung-woong plays Jang Pan-soo, the charismatic leader of a gang-turned-conglomerate.

In an unfortunate accident where the timid Dong-hyun slips from the roof of a building and falls on top of Pan-soo, the two wake up in each other’s bodies. This of course means both Jinyoung and Park had to play double roles.

Jinyoung, playing a high school student with the soul of a 40-something man, is suddenly exalted from the status of a nobody at school to a social lion who oozes confidence and power -- not to mention having a trustworthy grown-up sidekick played by Lee Joon-hyuk, who knows all about his boss’s body swap.

“I have never been that age, so I observed (Park Sung-woong) to copy how he acts and talks,” said Jinyoung at the press screening of the movie, held at Lotte Cinema near Konkuk University Station on Wednesday.

“I was told by the director that veteran actors would decline this role, and I think it was purely thanks to my lack of knowledge that I challenged myself. I wanted to learn, and I knew this role would be a big experience,” said Jinyoung.

For the first half of the movie, the K-pop star is heavily disguised. Wrapped around to look heavier, Jinyoung is double his normal size and weight as Dong-hyun. But after the accident, a metamorphosis begins with Pan-soo’s spirit inside Dong-hyun. Over the winter break, Pan-soo trains Dong-hyun’s body to win against the school bullies who had forced the boy to go up on the roof on the day of his fateful accident.

Park Sung-woong, on the other hand, takes on the timid nature of the student supposedly stuck in his body. For Park, who has emblazoned in people’s minds the dark, charismatic image of his previous role in “New World (2013),” each new work is a rebirth. 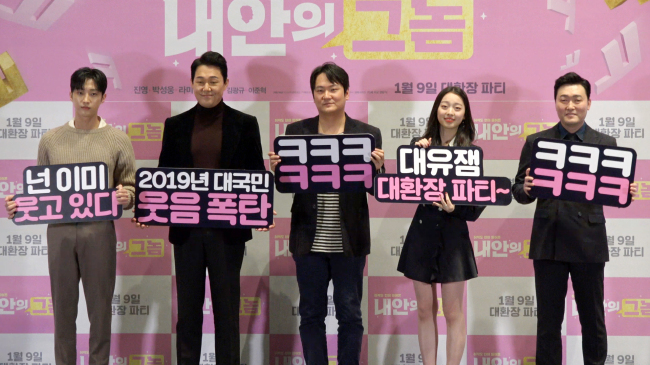 
“I want to push on for decades more in this life as an actor. It was a challenge for me to act (the part of) a high school student with my body, and that’s why I fiercely delved in,” said the 45-year-old Park.

Body swapping is theme that has been done countless times in cinema, and director Kang Hyo-jin differentiated his work from the others by breathing life into the details.

“It may come across as a hackneyed theme, but I wanted to create the difference by crafting the detailed process of a man adapting to another person’s life in another body,” Kang said.

The film is actress Lee Soo-min’s screen debut work. Lee plays Oh Hyun-jeong, a high school classmate of Dong-hyun who is also the surprise daughter of Pan-soo. Veteran actress Ra Mi-ran plays Hyun-jeong’s mother, who has raised her daughter in secret, unbeknownst to her former lover.

Billing itself as the first comedy movie of 2019, “Inside Me” will hit local cinemas on Jan. 9.