An early and smooth conclusion of the negotiations, which trade officials here say is far from guaranteed, would help improve external conditions for the Korean economy that relies heavily on exports for growth.

In 2017, China and the US accounted for 24.8 percent and 12 percent of Korea’s total outbound shipments, respectively.

Last week, Korea and the US held the first round of talks on revising their 6-year-old bilateral free trade deal in Washington. 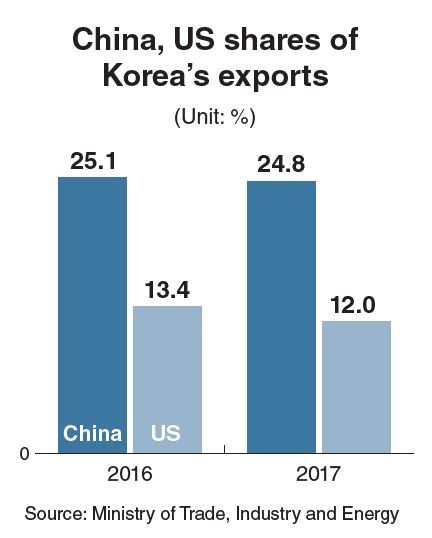 During the daylong session, the two sides discussed issues of interest and sensitive areas, agreeing to continue talks based on the initial discussion. The second round of negotiations is expected to be held later this month.

“The United States discussed proposals to move towards fair and reciprocal trade in key industrial goods sectors, such as autos and auto parts, as well as to resolve additional cross-cutting and sector-specific barriers impacting US exports,” said the US Trade Representative in a press release.

For its part, the Korean side noted its interest in resolving issues involving the investor-state dispute settlement clause and trade remedies.

The ISDS provision allows investors to sue countries for alleged discriminatory practices through international arbitration bodies. Experts here have expressed worries that large multinational firms could exploit the provision, leading to the infringement of the country’s jurisdiction.

The renegotiation follows President Donald Trump’s repeated blaming of the deal for the US’ trade deficit with Korea.

Partly due to increased energy imports, Korea’s trade surplus with the US dropped 22.7 percent from a year earlier to $17.9 billion last year. The figure fell below $20 billion for the first time since the trade accord between the two countries came into force in 2012.

The persistent trade imbalance still seems to bother Trump, who has described the pact as a “horrible deal.”

Trade Minister Kim Hyun-chong told reporters Monday he expected the US to increase pressure in the upcoming negotiations, as Trump might ratchet up his rhetoric ahead of the first anniversary of his inauguration on Jan. 20 to appeal to his core support base.

“It may be premature to talk about the negotiations that have just started, but I think there will be lots of work to do in a short period of time,” he said.

Korean trade officials have suggested they would conduct negotiations with the US in a way to enhance reciprocity and strike a balance of interests.

They appear ready to lift what are considered nontariff barriers to auto imports in return for changing the ISDS provision and leaving the local agriculture sector intact.


Korea may respond to a possible US demand for further opening of the domestic agriculture market with a call to ease conditions for imposing safeguards on US beef imports.

“US trade deficits are attributable more to macroeconomic factors and different industrial structures in the two countries,” said Lee Jun-won, an IIT researcher.

Korean negotiators remain cautious that Trump may opt to scrap the trade accord rather than accepting a revised deal that is balanced but falls short of his expectations.

In this case, Seoul would be forced to choose to have either no deal or a bad deal.

In parallel with negotiations with the US, Korea is stepping up preparations for upcoming talks with China to expand the scope of a bilateral free trade pact to include the service and investment sectors.

The deal, which took effect in December 2015, has focused on removing tariffs on goods.

The Trade Ministry held a public hearing last week to gather opinions to be reflected in its negotiating strategy for the follow-up trade talks with China, which are expected to begin in the early part of the year.

“Opening the goods market is a starting point, while opening the service market is a destination,” said Chung Whan-woo, a researcher at the Korea Trade-Investment Promotion Agency.

Sung Han-kyung, an economics professor at the University of Seoul, predicted the further opening of the service and investment sectors would lead to an additional 36 percent increase in China’s direct investment in Korea over the next 15 years.

Though measured, expectations have been raised that the follow-up talks would serve to set up a system to protect Korean companies from arbitrary restrictions, such as those they experienced last year when China retaliated against Seoul’s hosting of an advanced US missile defense system.