Micro-LED panels, which feature miniature light-emitting diode arrays with smaller, brighter modules and improved response speed, has been rising as the next-generation display in recent years following news of Apple working on the panel development. The US tech giant is said to develop the panels apparently to be independent from its suppliers as well as rivals, Samsung and LG.

Samsung has been seen following the move and even attempted to buy a Taiwan-based Micro-LED firm last year. The firm unveiled the 146-inch Micro-LED TV prior to CES on Sunday.
Questions, however, remain on the viability of commercializing the panel, with LG Display’s Chief Executive Han Sang-beom taking a direct aim at the rival that vowed to commercialize the Micro-LED TV this year.

“We are developing Micro-LED panels viewing there is a market demand for large panels with 150-inch and larger,” said Han Sang-beom, CEO of LG Display, at a press briefing held before the Consumer Electronics Show kicked off.

But the chief said he is still not sure of the date of commercial launch because there are cost issues and technical challenges to be addressed.

“We have some technical challenges to be addressed, for instance, to shorten the time of picking and placing tens of thousands of chips when making Micro-LED TVs,” he said, adding, “Once we achieve a technical breakthrough, we believe we can create a new niche market.”

The firm’s CTO Kang In-byung agreed, explaining that in order to produce an ultrahigh-definition Micro-LED TV, one needs about 25 million LEDs. Even if one LED costs 1 won, it would calculate to 25 million won, and with the addition of circuit and circuit board, the final price would be “unfathomable” for ordinary consumers, not to mention the productivity.

LG Display, meanwhile, may be a latecomer in the development of Micro-LED, but still appeared to be ahead of Samsung in flexible OLED panels for TVs. The firm released to the media on Monday by disclosing the world’s first 65-inch ultrahigh-definition rollable display during the show. 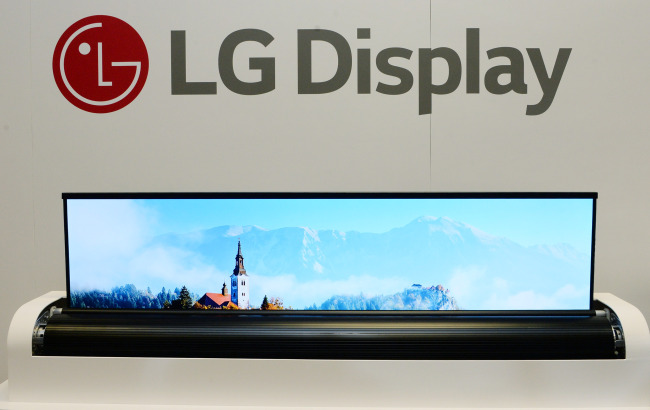 During the demonstration, a presenter turned on the TV and the screen, which was rolled up and hidden within a TV set, which slowly straightened out to become a 65-inch TV. The rollable display has a curvature radius of 50 millimeters, weighs around 20 to 30 kilograms and it is durable when rolled up to 100,000 times.

“We wanted to show the potential of organic light-emitting diode beyond televisions,” the chief said in explaining the firm’s three-year-long development. For the commercial launch, however, “It is still early to talk about and we need to discuss with set makers first,” he added.

LG Display, whose current mainstay is liquid-crystal display panels, targets to increase the portion of OLED in its sales.

The display maker recently announced it would invest 20 trillion won ($1.8 billion) in OLED business both for small and large panels, with the aim of increasing the OLED portion to 40 percent in 2020 from 10 percent last year.

“The rise of OLED in total sales will depend on how much we can supply plastic OLED (for smartphones) to our clients,” Han said but declined to make any comments about the possible supply to Apple iPhones.

LG Display used be a key LCD supplier to Apple before the US tech firm shifted from LCD to OLED for its iPhone series this year, picking Samsung Display as its sole supplier. Other Chinese tech giants, Huawei, Xiaomi, Oppo and Vivo are also following suit by adopting OLED panels for their new phones.

To a question citing Samsung Display that LG Display may face hurdles of quality issues in supplying OLED panels to Apple, the CEO refuted saying, “Although we cannot disclose quality issues in detail, we can say we identified the cause of problems and we believe performance will be improved,” adding, “(supply issue) is not decided by our client, not our competitor.”