By Korea Herald
Published : May 30, 2017 - 15:22       Updated : May 30, 2017 - 16:52
Joining the global rise of artificial intelligence, South Korean mobile carrier KT is currently working on the development of English and Chinese versions of a voice-activated AI device, the company’s AI chief said Tuesday.

In an email interview with The Korea Herald, Lee Phill-jai, executive vice president of the GiGA Genie business division of KT, confirmed the mobile carrier had completed and held unofficial demonstrations of the English and Chinese versions of GiGA Genie, with an aim to commercialize in the near future.

“For English and Chinese, (the) PoC (Proof of Concept) version has been already completed and demonstrated internally,” Lee said. “We further need to improve accuracy for the languages, add the languages to the display and establish (a) multi-language database. So, we are reviewing when it will be possible to launch officially.”

GiGA Genie is a voice-based AI speaker that was introduced by KT in late January to target the home AI assistance market. Major features of the device include the scheduling of daily chores and businesses; providing breaking news and information including real-time traffic information; calling up a taxi; ordering food; and controlling up to 100 types of home appliances with Internet of Things chips. 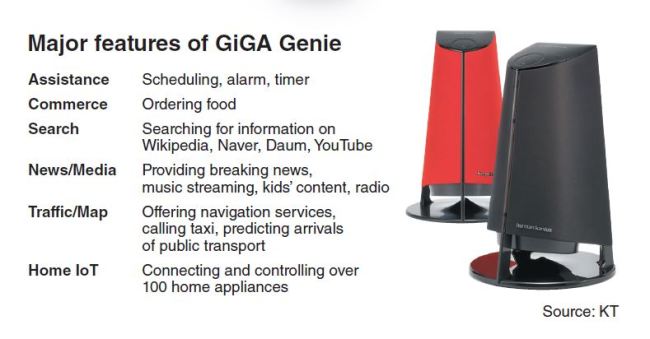 “A distinctive advantage of GiGA Genie, among many others, is its connection to TV,” Lee said. “It will be much easier to develop a variety of content for both TV and the AI device at home. For example, we are eyeing the kids content market, which can further lead to creating content that is helpful to stimulating kids’ brains.”

Earlier this month, the company added media content for children, enabling the AI device to recognize and provide fables, cartoon songs and lullabies for kids.

Another differentiation of GiGA Genie from other AI speakers, according to the company, is that it has a 6 million-pixel high-definition camera embedded, which makes the device not only hearing-centered but also an audiovisual device.

“Already, KT‘s AI speaker has an competitive edge in noise tolerance compared to others,” Lee said. “We are continuously adding spoken phrases and works to make the device recognize more accurately through machine learning.”

To globally expand the presence of GiGA Genie, KT is in talks with overseas e-commerce businesses for collaboration, Lee said. However, details of the talks are too early to make public, he added.

“Going beyond the home, KT plans to push the AI platform into the retail, automotive, medical and hotel industries,” Lee said. “With the backing of 5G network infrastructure, AI-based services are projected to expand rapidly across industries.”

KT believes AI will play a significant role in steering Korea toward inclusive growth by addressing social problems such as unemployment. KT’s Economics and Management Research Institute on Monday published a book on Korea’s “fourth industrial revolution,” saying that AI and other information and communication technologies would help create new jobs, reduce polarization and improve the quality of life. 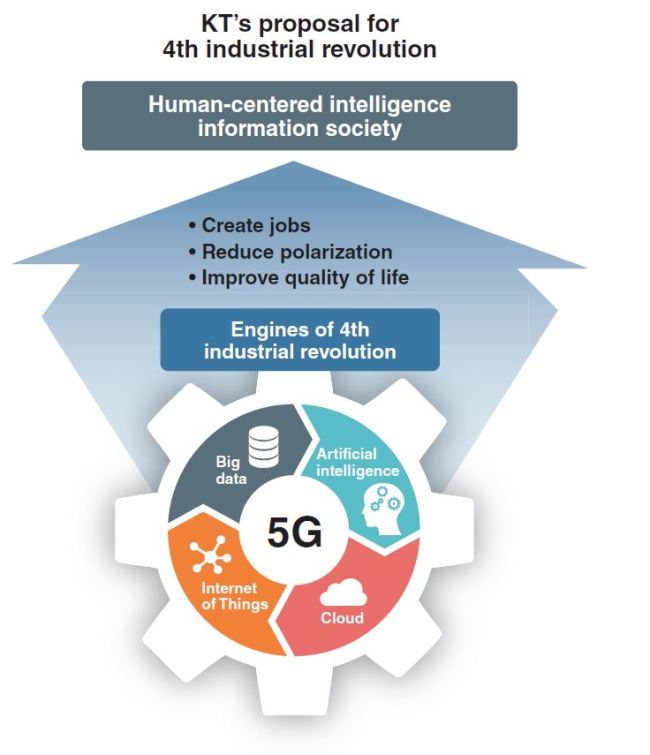 KT has defined the 5G network, big data, AI, IoT and cloud as the engines for the country’s fourth industrial revolution, and pledged early commercialization of the next generation communications network and utilization of the core ICT technologies for growth of the Korean economy.

Such ICT technologies are forecast to create 1.96 million to 2.35 million new jobs by 2030, generating about 370 trillion won ($329 billion) worth of real-added value, the KT institute said.

Among the chosen ICT technologies, KT is spurring efforts on AI.

Last week, the mobile carrier established the GiGA Genie business division headed by Lee in order to focus on the development of new AI services, partnerships with different industries and ultimately expanding the AI ecosystem.

In January, KT created the AI Tech Center under its Institute of Convergence Technology, which will solely concentrate on developing AI-related technologies. About 130 AI experts are working for the center. The company plans to hire 50 more within the year.

“Based on KT’s AI technologies, customer base, business partners, we will provide differentiated values for our customers,” Lee said. “KT has been working on AI technologies for about 20 years. Our goal is to provide a highly convenient voice-activated interface for our individual subscribers and convenient channels for our corporate customers. GiGA Genie will serve as a catalyst for boosting AI services in the market.”

KT is on track to launch a second edition of the GiGA Genie device in the second half of the year by improving the accuracy of natural language processing and making the device look sleeker.

Under the agreement, the upcoming GiGA Genie will introduce a new financial service category, enabling users to ask the device to browse stocks and indexes as well as get stock recommendations. In the long run, the two plan on launching services, for instance, remotely creating a new securities account via the AI platform.

“KT seeks to provide AI services for the five target areas - media, finance, smart energy, disaster/safety and company/public values,” Lee said. “Combined with the 5G network, we believe AI will be a new growth engine of the Korean economy.”

By early June, the total number of subscribers to GiGA Genie is expected to reach 100,000 in five months since its launch. KT aims to attract 500,000 subscribers by the end of the year.