This is the second installment of a three-part series on LG Group, one of South Korea’s leading conglomerates, which is celebrating its 70th anniversary this year, by looking into its accomplishments of the past and initiatives for the future. -- Ed.

Succession of leadership to firstborn sons is what has kept LG Group, South Korea’s fourth-largest conglomerate, away from unnecessary family feuds and paved the way for sustainable growth.

The tradition being settled for the last seven decades has created LG’s unique management style that prioritizes people over profit, known as “The LG way.”

The origin of the LG way dates back to its founder, the late Koo In-hwoi, who grew up in a strict family environment in Jinyang, South Gyeongsang Province, in which Koo learned the importance of living with others as four generations of the Koo family lived under the same roof.

That eventually became his management philosophy, stressing harmony among all people, including customers, employees and business partners.

Koo also took care of society, saying “As fish can’t live out of water, companies should think of society they belong to and make contributions.”

He had stressed, “Business that cares about society can achieve sustainable growth.” 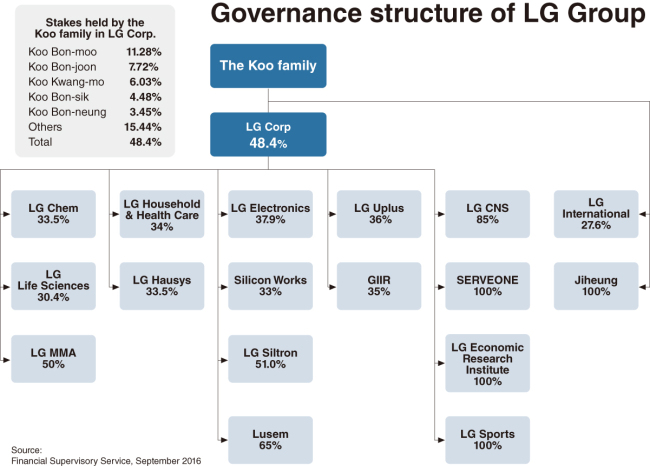 Koo established Lak Hui Chemical Industrial Corp. in 1947, which produced Korea’s first facial cream. He could start the business with the financial backing of Huh Man-jung, a relative of his wife Huh Eul-soo. The Huh family were close neighbors of the Koos. It was the beginning of a decadeslong feud-free partnership between LG and GS Group, another leading family-run conglomerate in Korea that separated from LG in 2005.

Lak Hui expanded its business portfolio from cosmetics and toothpaste to plastics, producing a wide range of daily necessities such as hairbrushes and toothbrushes.

Koo passed away in 1969. His younger brother Koo Chul-hwoi suggested his nephew, the eldest son of the founder, Koo Cha-kyoung, who was a schoolteacher, take the helm of the family business in the following year at age 45. The son had been trained by his father at an early age since 1950.

Under Koo Cha-kyoung from the second generation, both Lak Hui and Goldstar achieved remarkable growth.

Lucky and Goldstar were put under a single Lucky Goldstar Group in 1983.

Koo Cha-kyoung stepped down after spearheading the group for 25 years, and passed the leadership to his eldest son, Koo Bon-moo in 1995, who still serves as the incumbent chairman.

With the new third-generation leadership, Lucky Goldstar was rebranded as LG.

“Based on our previous innovation, we will have a second innovation,” Koo said in his inaugural speech.

He faithfully inherited LG’s top priorities – people and society – from his father and grandfather, and added creative entrepreneurship and challenging spirits to the family tradition.

That has developed as LG’s “Jeongdo (‘right path’) Management,” the latest management philosophy centering on value creation for customers, human respect over management, integrity and fairness.

Current Chairman Koo not only enriched LG’s portfolio by starting the telecom and display businesses, but also added transparency to the group management by overhauling the governance structure with a newly established holding company system in 2003 as the first among Korean chaebol. Today, Samsung, Hyundai Motor and Lotte Group are all operating under complex cross-shareholding systems that allow the ownership family members to wield immense power across subsidiaries by owning minority stakes.
According to the Financial Supervisory Service data, the Koo family, including the current chairman, owns a 48.4 percent stake in LG Corporation and a 27.6 percent stake in LG International. The chairman is the largest shareholder with 11.28 percent, followed by Koo Bon-joon, the chairman‘s younger brother with 7.72 percent and Koo Kwang-mo, his eldest son with 6.03 percent.

Koo Kwang-mo, the only son of the current chairman, is highly likely to succeed his father. The 39-year-old Koo has been working for LG for the past 11 years, starting as an assistant manager. Now he is a director at the holding company.

“Looking back to LG’s stable inheritance history, it seems reasonable and highly possible for the son to succeed the father,” said a market watcher. “LG has been an exemplary model of Korean family-oriented conglomerates with a desirable governance structure and respectful management philosophy.”