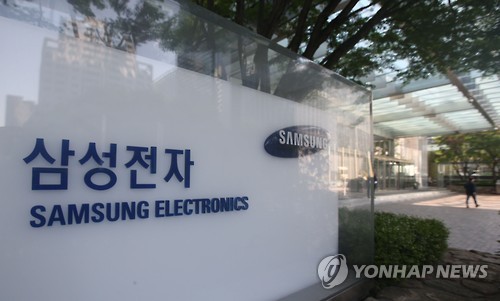 Samsung Electronics could consider a merger with Samsung SDS’ IT service unit after turning into a holding company system, a local securities brokerage said Wednesday.

According to a report by Mirae Asset Daewoo, the country’s largest securities brokerage, Samsung’s newly established holding company might choose to incorporate with the IT service unit of Samsung SDS, an IT solution provider, to enhance its control over the entire group.

Samsung Group and its owner family currently hold a combined 56.7 percent stake in Samsung SDS, but the share value has fallen recently. Rather than selling the stake at currently low prices, the group is much more likely to use it to strengthen its dominance across all subsidiaries, said Chung Dae-ro, an analyst at Mirae Asset Daewoo.

“This way, the group will be able to acquire the stake in the new holding company without paying additional costs,” Chung said.

Samsung has announced it is considering the establishment of a holding company to maximize shareholder value and seek further growth. It is also part of heir apparent Lee Jae-yong’s plan to succeed his father Chairman Lee Kun-hee. A final decision is expected to be made before June.

A spin-off is suggested as one of most effective and efficient measures for the electronics unit to convert into a holding company system successfully, according to financial analysts.

Samsung Group and its owner family currently own a combined 18.12 percent stake in the electronics business, while the unit has 12.8 percent of buybacks.

The analyst also projected that the governance conversion process is highly likely to accelerate, as a legislation that aims to ban using corporate Treasury stocks for spin-offs is pending at the National Assembly.