By Korea Herald
Published : Nov 13, 2016 - 17:40       Updated : Nov 13, 2016 - 17:40
South Korea’s financial authorities will enhance efforts to curb the growth of household debt to prepare for the possibility that the Federal Reserve might raise interest rates faster than market expectations after a surprising presidential election win by Donald Trump.

According to a high-ranking official at the Financial Services Commission on Sunday, the Fed seems likely to increase its rates in December -- as it has long been preparing for -- despite the unexpected election result. The Korean financial regulator is closely monitoring the Fed’s moves and market conditions. 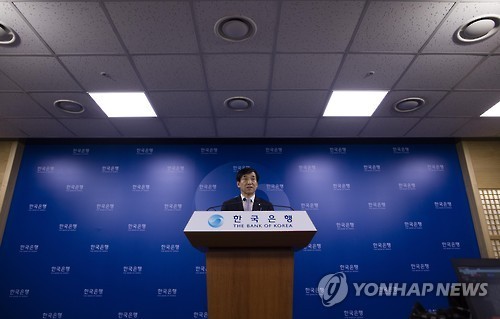 “Long-term bonds’ rates have started to rise globally, a sign that we are carefully watching,” the official told The Korea Herald. “The rising bond rates would affect fiscal soundness of local financial institutions, and ahead of that, the regulator will strengthen efforts to reduce risks at the institutions including the household debt problem.”

Increases in long-term bond rates are getting stronger due to high expectations about a Fed rate hike next month. Richmond Fed President Jeffrey Lacker made a comment Thursday that the Fed could raise interest rate more quickly, when asked about how the US central bank would react to the incoming Trump administration.

Such bond rate increases will gradually lead to higher rates for various financial products in the market. There are already concerns about the impact of a US rate hike on the debt-ridden household economy, as many commercial banks here moved to raise mortgage interest rates.

Lee Ju-yeol, governor of the Bank of Korea, said Friday, “The rising market rates are leading to increasing burdens on debt-ridden households.”

Higher market rates can cause the country’s massive household debt to turn into a “time bomb” as many pundits warn here.

As of the second quarter of this year, aggregate household debt stood at about 1,260 trillion won ($1.08 trillion), 126 trillion won higher than a year earlier.

About a quarter of the total debt is saddled with households that are financially vulnerable.

According to data compiled by the Bank of Korea, household loans issued by secondary financial institutions, including non-bank institutions, stood at 274.9 trillion won as of August, jumping around 13 percent as of June compared to the same period last year.

As the pace of debt growth in the secondary financial sector has accelerated faster than expected, the country’s financial regulator decided to come up with tighter credit screening guidelines for the relevant institutions within the year.

“Since those borrowing loans from secondary institutions are financially more vulnerable compared to borrowers with commercial banks, it is critical to take pre-emptive measures to manage related risks in preparation against growing jitters in the global financial market,” said Yim Jong-yong, chairman of the FSC on Friday.

The FSC is planning to implement a new debt service ratio index, known as DSR, across all financial institutions by the end of the year, which will gauge an individual’s aggregate financial capabilities to borrow and repay loans. With the introduction of the index, financial institutions will get access to information regarding a consumer’s total debt with other institutions including credit card firms and estimate a lendable amount.

The regulatory agency was going to adopt the index next year, but brought forward the timing due to rising concerns about the steep growth of debt.

However, it is highly unpredictable how President-elect Trump will handle the rate issue. The Trump camp pledged to issue more Treasury bonds and expand fiscal spending to bolster the sluggish economy.

“Looking at Trump’s pledges, it is natural to expect rates to rise,” said Lee Jong-woo, head of research at IBK Investment & Securities. “Trump has been opposed to the protracted low interest rate environment.”

“If Trump’s economic pledges are all implemented as he claimed, the Fed would move to keep increasing the key rates, but before that, we need to consider whether the Trump pledges are plausible or not.”