A ceremony was also held in Mexico on Wednesday (Mexico time) with some 500 company and local government officials taking part, including Chung Mong-koo, chairman of Hyundai Motor Group, the parent company of Kia Motors and its bigger affiliate Hyundai Motor Co. 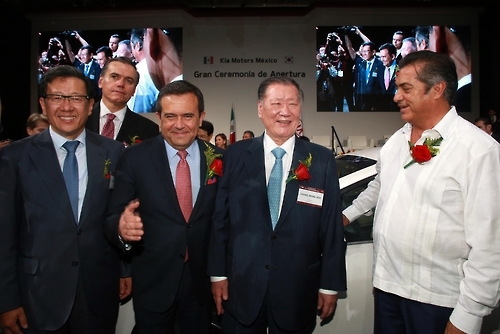 "The Mexico plant will produce cars with the world's best quality and innovative design that will meet demands not only in Mexico but also in other countries," Chung was quoted as saying.

Kia Motors began building the Mexico plant in 2014 as part of efforts to expand its market presence in Mexico and in North America.

The plant is the company's fourth overseas production facility and has an annual production capacity of 400,000 cars.

The Mexico plant is already helping boost Kia's auto sales in the North American country as it began producing cars earlier in the year.

Kia Motors sold 5,510 cars there in July, up 260 percent from the same month last year. In the first seven months of the year, the South Korean carmaker sold 29,006 cars in Mexico, compared with a mere 1,499 cars sold over the same period last year.

The company said it will work to boost its annual sales in Mexico to 55,000 cars this year, taking up a 3.5 percent market share. (Yonhap)