The figure compiled by the Bank of Korea excludes the money spent by Koreans on online overseas shopping or on business trips. The steep increase in overseas consumption appears to be correlated to the rise in the number of Koreans leaving the country for holidays, according to reports.

The number of overseas travelers between January and June was 16.26 million, a 16.2 percent on-year increase, according to the Korea Tourism Organization.

The government has designated extended holidays and promoted domestic travel to bolster the local economy.

Despite the government’s efforts, more Koreans have chosen to visit nearby Asian countries such as Japan, Taiwan, and Vietnam during extended holidays, as traveling within Korea costs as much as visiting the foreign countries, according to local reports.

KTO data also showed that Korean tourists to Japan during January and June this year rose 31 percent on-year, reaching more than 2 million travelers. The hike is partly due to the weakening yen and the increasing number of routes operated by low-cost carriers, it said. 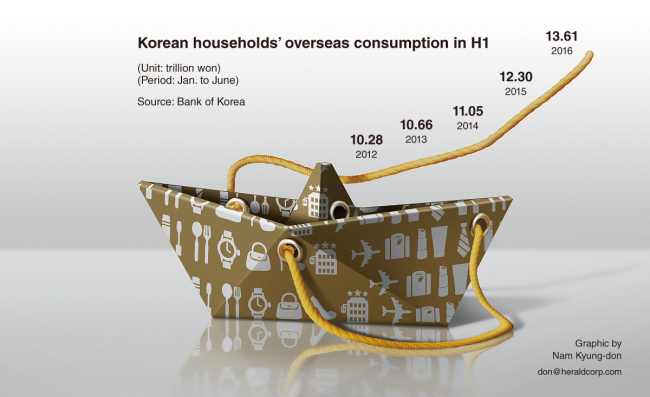