Participating carmakers in this year's Busan International Motor Show have something in common amid the lingering impact of Volkswagen AG's diesel emissions scandal: environmentally friendly vehicles.

In the biennial motor show, which opened Thursday and will continue through June 12 at the BEXCO exhibition hall in Busan, 453 kilometers south of Seoul, most of the 25 domestic and imported carmakers came up with a reinforced lineup with hybrid or pure-electric models or with a plan to add such models to their lineups. 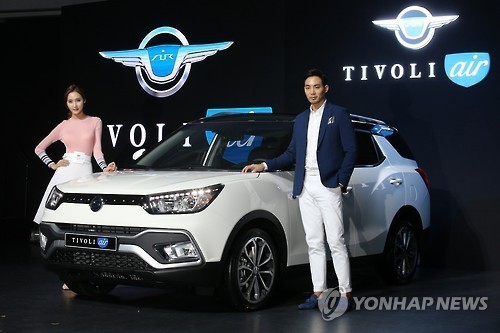 As governments are moving to adopt stringent regulations on diesel cars, the demand for "fuel-efficient but less-polluting" vehicles will grow bigger. To meet stricter regulations, carmakers will have to develop more eco-friendly models, said Kwon, who is in charge of research and development at Hyundai Motor Group.

For example, the Indian government will not register any new diesel taxis while allowing all existing diesel taxis in Delhi to operate in the national capital until their permits expire. The U.S. aims to put more than 3 million zero-emissions vehicles on the roads by 2025, he said.

The Korean government also plans to announce its regulatory measures against diesel cars early next month. Diesel cars emit a great deal of nitrogen oxide, one of the main causes of fine dust which could harm people's lungs.

In Busan, Hyundai introduced the Ioniq gasoline hybrid and Ioniq pure-electric models, which are developed to take on its archrival Toyota Motor Corp.'s Prius. Kia released the plug-in hybrid version of the K5 midsize sedan in a world premiere and the plug-in Telluride SUV concept.

Hyundai and Kia together form the world's fifth-largest carmaker by sales.

Hyundai didn't stop there. To beef up its independent brand Genesis lineup, Hyundai unveiled the G80, the next-generation model of the existing Genesis luxury sedan, in a global debut Thursday.

The flagship model will go on sale in July in the domestic market, it said.

It will absorb the large Grandeur sedan into the Genesis lineup next year, under the new name of G70. The EQ900 upper-large sedan, or the G90, domestically launched in November, will advance to the U.S. market in the third quarter, a Hyundai spokesman said.

GM Korea, which is 76.9 percent owned by General Motors Co., has introduced the Volt, a plug-in hybrid electric vehicle, as it sees the car's big growth potential here amid growing concerns about pollutants from diesel-powered vehicles.

"The two models will go on sale in the domestic market later this year. They will be produced in the U.S. and shipped to Korea," a GM Korea spokesman said.

Meanwhile, Renault Samsung Motors Co., an 80.9 percent-owned unit of French carmaker Renault S.A., came up with its all-new SUV QM6 to meet local customers' growing appetite for SUVs. The QM6, fully revamped from the QM5 SUV, will be produced at its Busan plant for export starting late this year.

Ssangyong Motor Co. didn't participate in Busan's motor show in 2014 or 2016 due to space allocation problems at BEXCO and the lack of new models.

This year, foreign carmakers such as BMW Korea, Volkswagen Korea and Ford Korea built their exhibition booths inside and outside BEXCO to further showcase their products to customers. And the exhibition space allotted to imported automakers reached 11,700 square meters, bigger than the 10,250 square meters given to the country's five carmakers, according to the motor show's organizing committee.

To take advantage of higher demand for SUVs, Italian carmaker Maserati and British automaker Bentley have launched their first SUVs, the Levante and the Bentayga, respectively.

"Bentley and MAN Truck & Bus Korea are two major newcomers in the Busan motor show, as Korea is still a growing market for foreign carmakers," Ahn Jae-young, a committee spokesman, said. In Korea, 7 out of 10 cars on the roads carry the emblem of Hyundai or Kia.

Meanwhile, Volkswagen Korea didn't hold a press conference on Thursday. The German carmaker has suffered a worsening brand image globally after it admitted last year that it had deceived regulators about how much its diesel cars were polluting the air. (Yonhap)