It houses more than 1,000 companies in different industrial categories -- ranging from information technology to biotechnology -- and employs about 70,000 people, generating 70 trillion won ($60 billion) in combined revenues last year. This accounts for more than 20 percent of the entire gross domestic product of the largest province in Korea. 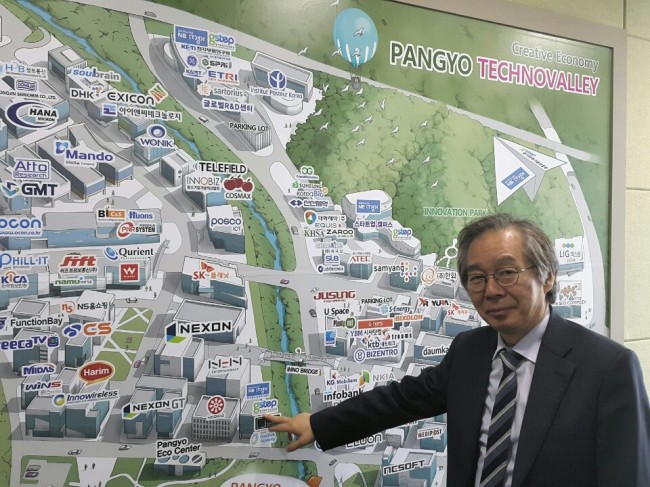 The Pangyo venture cluster is like a treasure trove of innovations coveted by information and communication technology behemoths such as Samsung Electronics and SK Telecom, according to Kwak Jae-won, president of Gyeonggi Institute of Science and Technology Promotion, an institute set up to support policies in the science and technology sector in the province.

“Samsung, which was traditionally conservative in outsourcing and collaboration with outsiders, now hopes to paint the future together with ventures and start-ups in Pangyo Techno Valley,” the GSTEP president told The Korea Herald in an interview this week.

The GSTEP president and top officials of government-run institutes, including the graduate school of convergence science and technology at Seoul National University, launched the Global CTO Forum late last year in a bid to encourage exchange and collaboration between the chief technology officers of the Pangyo-based companies.

More than 100 CTOs of firms in the Pangyo Techno Valley were invited to the latest monthly forum held at Samsung’s newly opened R&D center in Umyeon-dong in southern Seoul.

At the event, Samsung promised to allow the ventures and start-ups to utilize facilities at the first and second stories at one of the buildings at the R&D campus.

Along with the CTOs of Samsung and SKT, their counterparts from conglomerates such as Hyundai Motor participated in the event to rub shoulders with the executives of the Pangyo-based companies.

The CTOs’ meeting is one of the projects led by the GSTEP, which is fully funded by the Gyeonggi Province government, to grow local start-ups and vitalize the science field in Pangyo Techno Valley.

It establishes tailored science and technology support programs for 31 cities and counties in the province, which is home to 13 million residents.

GSTEP runs R&D centers for biotechnology where researchers conduct research projects for their own as well as private companies lacking sufficient capital and equipment, upon request.

Celebrating the 25th year of diplomatic ties between Korea and Russia, the provincial government-funded institute held a forum where Korean and Russian science and technology experts and government officials discussed future partnerships between companies in Pangyo and the start-up cluster in Russia’s Skolkovo.


Some Pangyo-based companies including telecommunications equipment maker SOLiD have already tapped into the Russian market and GSTEP will try to help Russian ventures to adopt Korean technologies.

Working together with the newly launched Start-up Campus, a start-up incubation center in Pangyo, GSTEP will provide full-fledged support for companies in emerging industry sectors including the Internet of Things, big data, and cloud computing.

“At the new incubation center, around 200 start-ups will work on state-of-the-art technologies including virtual and augmented reality,” Kwak said.

“GSTEP will also spare no efforts to bring those Korean venture firms to the global markets by working with start-up accelerators SparkLabs, ActnerLab, FuturePlay, and Venture Port,” he added.