From military to weather to asteroid mining, outer space’s seemingly infinite scientific and commercial potential has in recent years been enticing a growing roster of countries across the globe into exploring the boundless expanse.

Despite being a latecomer to the bandwagon, South Korea is seeking to expand its forays, such as with a moon probe, capitalizing on its success -- following two failed attempts -- in lifting off its first Naro space rocket in January 2013 with the help of Russia.

North Korea is deemed about two to four years ahead of its affluent, tech-savvy southern neighbor in terms of rocket development due chiefly to its years-long investment in building intercontinental ballistic missiles entailing similar technologies.

The North effectively joined the coveted global “space club” in December 2012 by putting a satellite, albeit crude, into orbit with its own liquid fuel expertise, while being subject to a crippling U.N. Security Council sanctions. Its latest launch came last month.

The space race began to unfold alongside the brewing Cold War led by the then-Soviet Union and the U.S., which sent off their respective Earth satellites, Sputnik 1 and Explorer 1, in 1957 and 1958. France came next in the 1960s, followed by China, Japan and the U.K. in the 1970s. Now the league has a total of 13 member states, also including India, Israel and Iran. 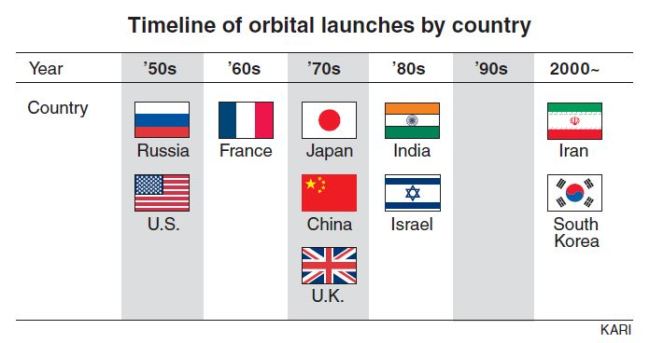 The competition is intensifying especially across Asia in the face of fierce strategic rivalry between regional powers, breeding concerns over an overheated arms race, nationalist sentiment and other byproducts that may overshadow space’s grand values as global commons.

While Pyongyang’s military ambitions remain a top source of international censure, Pakistan, Indonesia and other countries are aiming for independent space-launch capabilities.

In contrast, European countries are leaning toward transborder cooperation, with the 18 nations’ jointly financed European Space Agency at the core.

“Asia’s space powers are largely isolated from one another, do not share information and display a tremendous divergence of perspectives regarding their space goals and a tendency to focus on national solutions to space challenges and policies of self-reliance rather than on regionwide policies or multilateral approaches,” James Clay Moltz, a national space security expert and professor at the Naval Postgraduate School in the U.S., wrote in a 2012 book.

“Current trends exhibit a variety of action-reaction dynamics that may eventually become difficult to control, if efforts are not made to adopt confidence-building measures, increase transparency and initiate consultations to prevent future space conflict.”

Seoul, for its part, set about laying the technological groundwork for launching a space vehicle after the 1996 inception of its own national space program, introducing the solid-fuel Korean Sounding Rockets 1, 2 and 3. 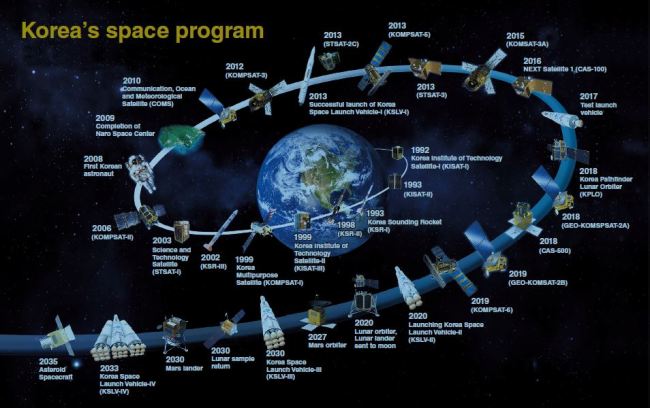 They served as the basis for the Naro-1, or Korea Space Launch Vehicle-1, which weighs 140 tons and measures 33.5 meters in length and 2.9 meters in diameter. Its liquid-fuel first-stage rocket was assembled by Russia’s Khrunichev State Research and Production Space Center, and the solid-fuel second stage by South Korea’s state-run Korea Aerospace Research Institute.

The initiative is on track for a test launch in December 2017, KARI president Cho Gwang-rae told The Korea Herald, as engineers “finally tackled” the incomplete combustion issue of the 75-ton thrust engine last January, which had sparked concerns about a possible delay.

To inject fresh vigor into its space program, the Park Geun-hye administration jacked up this year’s related budget by a whopping 20 percent on-year to 746.4 billion won. Action plans include crafting a multitude of satellites for public use and national security; fostering partnerships between state and other local think tanks and small and medium-sized businesses; supporting technology assistance and marketing; and writing manuals to prevent any ground damage from a clash of space objects.

The country is also setting sights on sending its maiden, homegrown moon lander by 2020. It plans to allot nearly 200 billion won over the next three years to develop a robotic orbiter and a ground station for data analysis.

“Given North Korea’s nuclear and missile threats, our space program could in effect serve as a deterrent, as it is a peaceful technology in itself, but closely linked with national security,” said Choi Gi-hyuk, director of KARI’s lunar exploration program.

“Our key focus of the moon project lies on scientific research, but it will have a direct and indirect impact on not only the nation’s science technological progress, but also national security, which is pivotal in light of the peninsula’s division and our geopolitical location.”

Though concerns remain over regional competition, signs are growing that future space development will likely shift toward worldwide or multilateral partnerships also involving companies like Space X and Boeing, which have already been working together with the U.S.’ NASA.

In addition to the ESA’s Rosetta, Philae lander and other missions, NASA and KARI are participating in mapping out a long-range human space exploration strategy with 12 other space agencies from Russia, China, Japan, Germany and elsewhere.

A focal point is a long-aspired mission to Mars, with NASA aiming to send astronauts there by the 2030s.