Studying is the key to owning your life

Kim Chung-woon, formerly a psychology professor and who now calls himself a “creator,” is perfectly at home in his basement office in Nonhyeon-dong, Seoul. It is an entirely appropriate title, he claims, as he now writes and paints.

Kim’s office is a veritable man cave, that any man -- or woman, for that matter -- would dream of having: Walls lined with massive bookshelves holding volumes and volumes of books; a long desk from Japan that is crafted out of a very old tree trunk; a little nook with an easel and painting paraphernalia; a complex high-end sound system and a couch positioned just so you can appreciate the full impact of whatever may be blasting out of monstrous speakers.

On the morning of Jan. 26, the day of this interview, that music was jazz.

“Well, this is a best-selling author’s place,” Kim says nonchalantly, carefully pouring hot water over ground coffee beans, when I remark that visitors must envy this space. His latest book, “Sometimes, One Should Be Utterly Lonely,” has been top of the best-seller’s list at a major online book store for three consecutive weeks. Several of his previous books have also been bestsellers.

Having returned from Japan -- where he spent the last four years studying Japanese painting -- just four days ago, Kim complains about the busyness of Seoul life. He was a very popular television personality and speaker before he suddenly dropped everything and left for Japan, so he gets numerous calls from broadcasters and politicians. He resents having to apologize when turning down their offers. “I have to say sorry for declining although I haven’t done anything wrong,” he says.

Kim raises the issue of “busy work” in Seoul in his book. For example, weekends are spent going to weddings and funerals when it would hardly matter whether he showed up or not. It is such needless chores and routines that get in the way of people discovering what they really want to do with their lives. People these days just do not have the time or space to be lonely, a prerequisite for self-reflection, he points out.

“It took a period of absolute loneliness to reflect on what I like. I realized that I didn’t like teaching,” he recalls about his decision to resign from Myongji University. On the diary entry for Jan. 1, 2012, the year he turned 50, it is written, “From now on, I am going to do only what I like to do.” Since then, his life has been about discovering what he likes and doing only what he likes.

While people around him said he was very brave to have quit teaching, Kim thinks otherwise. “We now live longer. I saw no reason to continue as a professor.  I didn’t want to age like other professors,” he says, adding that ageing professors are the most pathetic people. According to Kim, his resignation was a calculated one. Life expectancy is much longer these days and if he worked till retirement, he would be too old to start something new. It was better to find something to do for the rest of his life while he was still young enough.

In fact, studying is Kim’s prescription for long life expectancy -- you can have fun well into old age. “Right now, we are only discussing the economic issues that longevity entails. Let me ask you, does a pension make you happy?’”

“Sometimes, One Should Be Utterly Lonely” is an illustration of how he is living what he preaches -- seek loneliness to figure out what it is you really want, to really own your life.  At the same time, the book provides readers with various theories -- ranging from psychology to sociology and education -- that explain and support what Kim is advocating.

“The book shows how the humanities influence one’s life,” he says. As for the structure of the book which consists of personal episodes or observations followed by an explanation of the theories and concepts alluded to earlier in the chapter as well as his paintings related to those concepts, he says, “It is an intellectual’s experiment in new kind of writing.” Of all his books, Kim cites this and “Editology,” a book on creativity, as his favorites. Both books were written in Japan where he was “utterly lonely.”

His “lonely” four years in Japan were a time of great productivity. He wrote three books, studied Japanese painting and learned Japanese. “I am now proficient in four languages -- Korean, German, English, and Japanese,” Kim says, boasting that the mastery of several languages puts him at a great advantage. “One should have one’s own ‘content’ and language is basic to achieving that,” he says. 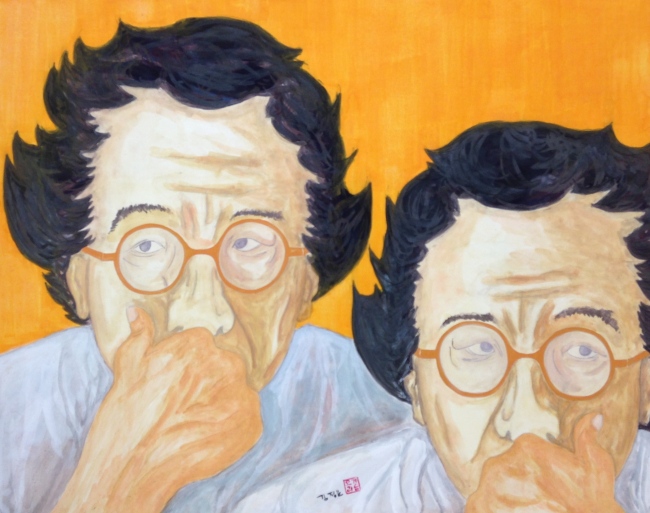 “The greatness of Freud is that his reflection on sexuality is based on self-analysis,” Kim says, explaining that he uses paintings and theories of psychology as channels for discussing eroticism.

Kim’s ultimate aim is to produce a “stupendous” theory on jealousy. “Jealousy is the mechanism which makes all cultures possible,” he explains. Kim promises that this theory will be a mind-blowing one. In fact, on this point Kim seems bent on proving that he is no intellectual light-weight, perhaps a response to those who consider his books frivolous writings.

He is currently working on a book on Bauhaus, an early 20th century German school that envisioned the unity of art and design. “I am particularly interested in the meeting of Bauhaus and Asia,” he says.

“I find objects, art and intellectual discourse from the late 1800s and early 1900s most interesting. This is the result of the meeting of the East and the West,” he explains. His book will explore this theme and he believes he is uniquely qualified to write the book as he has mastery of four languages that gives him much access to diverse, rich resources. “I think I am the only one capable of writing such a book. Or so I continue to mistakenly think,” he says matter-of-factly.

“Men are Korea’s fundamental problem. Since I have all of those problems, I thought that if I analyzed myself, like Freud did, and talked about it, it would be applicable to everyone. Fortunately, I had a chance to reflect on myself, and I had the tool of psychology to make this book possible,” he says.

Next month, Kim will move to an apartment in Yeosu, a southwestern coastal city, with his new dog.

Why Yeosu? “I am a creator. Doesn’t it sound so much more artistic to say ‘I work in Yeosu?’

“I am looking into a 100-year-old house on a hill near a port that overlooks the sea. That is my final destination. I want to be a fisherman, going out on a boat with my dog in the morning.

“Have you heard of ‘The Old Man and the Dog’? I generally do what I say I will do. You will be reading that book someday,” Kim says.