Military sources said that the state-run Agency for Defense Development had put forward the plan in its five-year policy outline, which was adopted right after the Park Geun-hye administration assumed office in February 2013.

“Currently, we have developed ballistic missiles with a range of up to 500 km, and the plan means extending the range to 800 km,” a military source told the media. “We are aiming to deploy the missile with an 800 km range by 2017.”

If fully developed, the missile with an extended range will be able to put all military targets in the North within striking range. Calls have been mounting for Seoul to bolster its strike capabilities to bridge the “missile gap” with its northern neighbor.

The North has hinted that it would carry out a satellite launch around Oct. 10, the 70th anniversary of the founding of the ruling Workers’ Party. The launch, if it goes ahead, is expected to further enhance its ballistic missile technology. 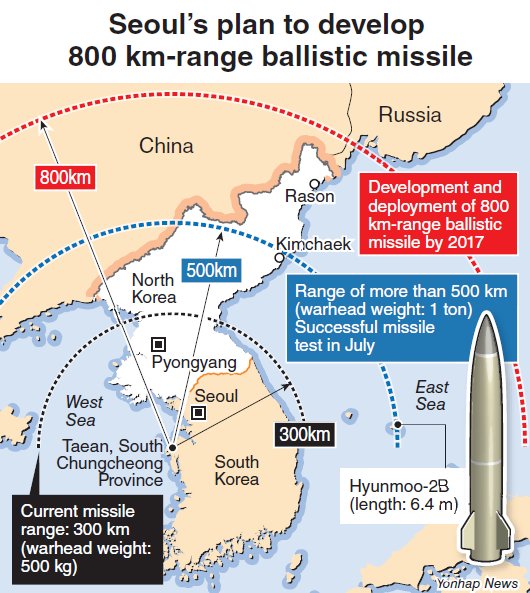 The North’s latest “satellite” launch in December 2012 was regarded as a success. Analysts say that the long-range rocket carrying what the North called a research satellite is believed to have a range of 10,000 km -- far enough to strike the U.S. mainland.

Seoul’s push for longer-range missiles gathered momentum in October 2012 when Seoul and Washington agreed on revising a bilateral guideline to allow the former to develop more powerful ballistic missiles with a range of up to 800 km, up from the previous 300 km.

Seoul pushed for the revision of the guideline -- first forged in 1979 and amended in 2001 -- as it did not reflect the changing security environment where neighboring states including the North have increasingly formidable missile capabilities.

The 2012 revision came after grueling negotiations with Washington which was apparently reluctant over the revision as it could undermine America’s global initiatives of nonproliferation and arms control, and could provoke China, Russia and Japan, not to mention the North.

After the revision, the South successfully launched the Hyunmoo-2B missile with a range of more than 500 km in July this year.

Those missiles -- including the 800 km-range missile to be deployed by 2017 -- would be an integral part of the so-called Kill Chain preemptive strike program that Seoul has been pushing to establish to better handle Pyongyang’s nuclear and missile threats.

The missile gap between the two Koreas is known to be big as Pyongyang has been pushing for longer-range strike capabilities to ensure its regime survival and raise stakes in negotiations with the U.S.

The North now has a relatively large assortment of ballistic missiles that can threaten South Korea, Japan, the U.S. and other potential adversaries.

In 2009, the North carried out a test of the Taepodong-2 missile, which is presumed to have a range of more than 6,700 km, enough to hit parts of Alaska. It also conducted rocket tests in April 2012 and December that year, all of which helped further enhance its overall long-range missile capabilities.