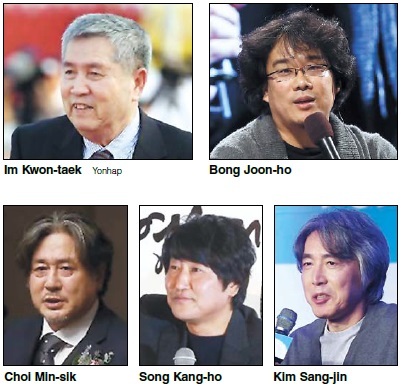 The Academy of Motion Picture Arts and Sciences invited Korean filmmakers Im Kwon-taek and Bong Joon-ho and actors Song Kang-ho, Choi Min-sik and animator Kim Sang-jin of Walt Disney as part of a group of 322 new members in an attempt to increase the diversity of its members.

“It’s gratifying to acknowledge the extraordinary range of talent in our industry,” said Cheryl Boone Isaacs, president of the AMPAS, in a press release.

“This year, our branches have recognized a more diverse and inclusive list of filmmakers and artists than ever before, and we look forward to adding their creativity, ideas and experience to our organization.”

The members can vote for candidates for the Oscars. Membership is by invitation only, which requires sponsorship by two existing Academy Award members and the approval of the Academy’s board of governors.

Veteran filmmaker Im Kwon-taek is known for his numerous films, including “Painted Fire,” “Chunhyang” and his 102nd film “Revivre,” released in March this year.