The out-of-nowhere global phenom Psy and America’s godfather of rap teamed up to cause mayhem in the streets of Korea with their notoriously drunken antics in the Korean star’s new bilingual single, which has more English lyrics than any of the rapper’s previous releases. 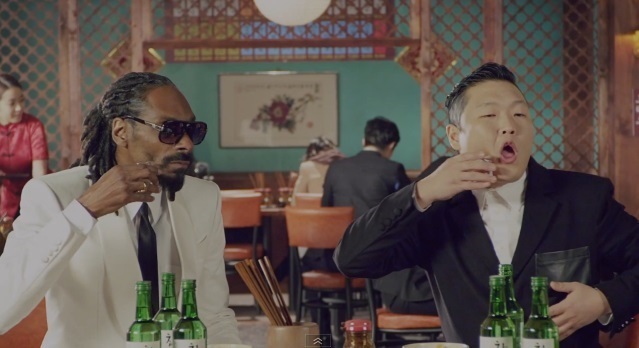 The “Hangover” music video, released globally via YouTube on Monday, showed the two rap stars drinking like there’s no tomorrow, painting the town red and hooking up with two random ajumma (middle-aged Korean women) -- under the pretenses of “If she’s not pretty, keep drinking until she is.”

From waking up hung over and heading over to the local convenience store for a cup of instant ramen and some energy drinks, then taking a soak in a Korean bathhouse to recoup before going off to repeat the previous night’s pattern of party-hard drinking, Psy’s latest music video places a huge spotlight on the Korean drinking and nightlife culture. The two stars are being seen drinking beer and soju, singing in karaoke rooms and crawling to various venues throughout the night for round-the-clock drinking showdowns. 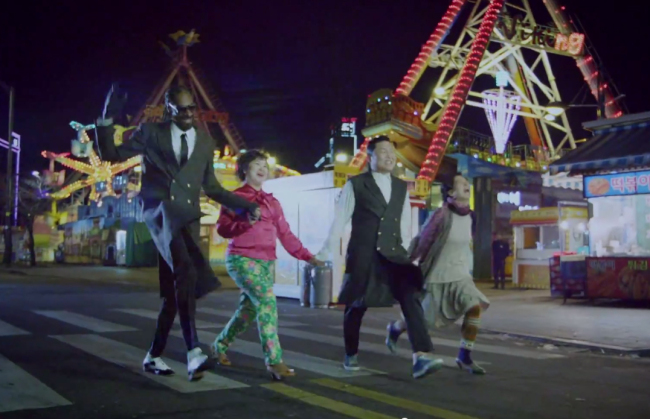 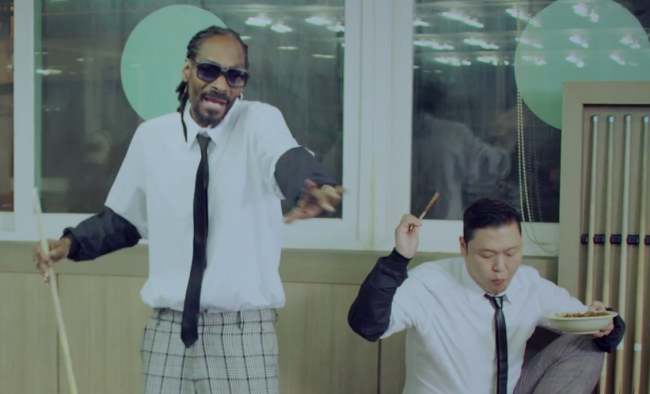 By Monday evening, the music video received more than 2.8 million hits and more than 100,000 likes on YouTube. At the end of the video, it was announced that Psy is already planning the release of another new single titled “Daddy,” which is expected drop sometime this summer.

On Monday, Psy and Snoop Dogg also gave their first on-air interview on the “Jimmy Kimmel Live: Game Night” late night talk show in the U.S. The new single is the first song to be released by Psy since his “Gangnam Style” follow-up track “Gentleman” was unveiled in April last year.

Psy’s “Gentleman” shattered YouTube’s record of most views in the first 24 hours, surpassing 35 million hits, more than triple the previous record of 8 million held by Justin Bieber’s “Beauty and the Beat.”

Despite being released more than a year ago, Psy’s claim-to-fame music video “Gangnam Style” is still attracting daily views on YouTube, setting yet another record by topping 2 billion hits on May 31.