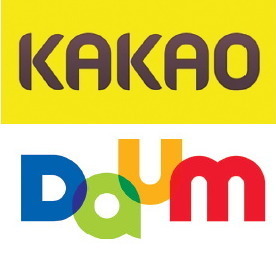 “The deal could offer a new business opportunity to the both companies,” an anonymous stock analyst said.

Daum Communications has sought to go mobile as a way out of the doldrums. Kakao has also wanted to secure more diversified contents for new revenue beyond its game platform, its dominant income source.

Daum said it would hold a joint news conference with Kakao in this afternoon to announce the merger.

Once the two firms are combined, a new tech giant is expected to debut, with about 3 trillion won ($2.9 billion) market capitalization, posing an apparent threat to Naver, the nation’s biggest portal company, industry watchers predicted.

The market value of the unlisted Kakao is estimated at around 2.3 trillion won. The value of listed Daum Communications currently stands around 1 trillion won.

Daum has recently been struggling as it failed to catch up with the mobile trend amid sluggish growth in online advertising revenues.

Meanwhile, its rival Naver made a breakthrough by successfully launching its Line mobile messenger in the global markets. Daum’s mobile messenger MyPeople failed to attract the same level of attention from local users.

“Despite the success in its main business, Kakao has an interest in the Internet portal business as the company has an initial public offering planned for next year. The company needs to find new income sources to give confidence to investors before the stock listing,” a source said.

Kakao’s game business has recently started to slide. The number of users declined to around 18 million early this year, compared to over 20 million last January. The company hasn’t made much progress yet in other contents businesses such as Kakao Story or Kakao Group.