In the May 11 episode of the SBS variety show “Running Man,” Nichkhun beamed happily when show host Yoo Jae-suk asked him, “Since when did you two start dating each other?” Nichkhun avoided a direct answer but instead cried out, “I am happy (to be with her),” spreading the happy atmosphere throughout the scene. 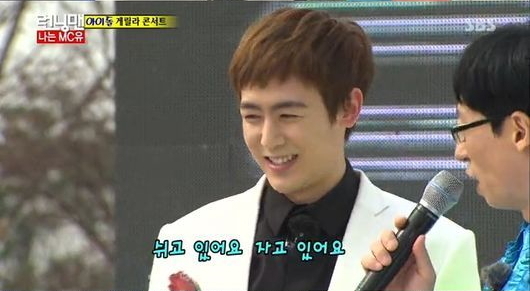 Then the host threw in a second question: “What is (she) doing today?” Nichkhun replied, “She is taking a rest -- she’s asleep,” in a protective way.

“So you talk to her (often enough),” the host said playfully, making other participants laugh.

“Running Man” has gained popularity at home and throughout Asia since its first episode on July 11, 2010. The show has been subtitled with different languages such as English, Spanish, Thai, Vietnamese and Arabic via hallyu fans.