The transition committee’s division on women and culture is expected to focus on offering greater opportunities for women, promoting gender equality both at work and home, and expanding state expenditure on cultural programs and activities.

As the nation greets its first female president next month, women’s issues have come to the fore. Many expect that Park Geun-hye’s rise to power would have a significant impact on Korea’s still male-dominated society.

Park promised to increase women’s opportunities in education and employment and, most importantly, reduce the burden from child care. Her campaign pledges include providing free child care, reduced working hours for pregnant workers, and one month’s paid paternity leave so fathers can also take care of their newborn babies. The incoming leader also vowed to expand after-school child care services and school programs for kids with working parents. 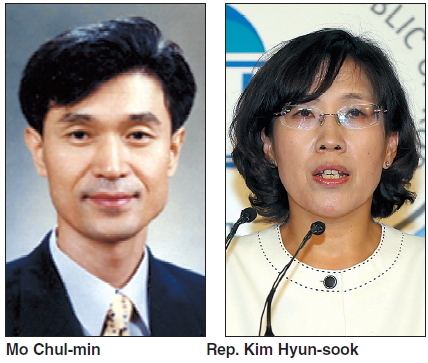 As Park’s pledges on women involve massive public funds, the subcommittee is assigned to seek ways to secure enough of the state budget and also offer a blueprint for the new government to realize Park’s vision on gender equality.

Rep. Kim, a member of the subcommittee, is a scholar-turned-lawmaker who designed most of Park’s presidential campaign pledges for women. The former economics professor at Soongsil University, in Seoul, caught the spotlight as her ideas for the presidential campaign, particularly the plan to offer one-month paternity leave, won positive response from voters.

She told reporters last week that the subcommittee was working on ways to expand public child care support.

“Expanding public child care services will be placed on the top of the new government’s agenda. (The new government) will build 50 day care centers every year and encourage 100 private services to turn themselves into public ones,” she said.

On culture, the panel is assigned to seek ways to increase the percentage of state expenditure on arts from 1.14 percent to 2 percent. Culture Ministry has been calling for bigger state supports to increase the public’s opportunity to appreciate the arts.

For this, the panel is expected to discuss ways to offer more cultural experiences to different age groups as well as low-income families and those in rural areas. To continue the popularity of Korean pop and traditional culture, the subcommittee will be tasked with boosting the development of cultural and tourism content.

Park picked SAC chief Mo, a relatively unknown figure in the political arena, to spearhead the subcommittee. Observers say that Mo was tapped as head of the subcommittee for his long experience in the government, particularly in the tourism and cultural sectors.

Mo served as a vice culture minister from August 2010 to November 2011 and the director of the National Library of Korea between May 2009 and August 2010. Mo received a medal from the French government in 2007 for his contribution to promoting cultural exchange between the two countries. He led the Korean Culture Center in Paris from 2004 to 2007.